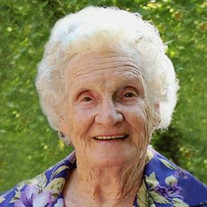 Orvaneil Boyd Olson Densley Snelgrove Gyllenskog Hodges slipped quietly across the veil June 10, 2017 at the home of her daughter in Smithfield, Utah at 97 years young. She was an outstanding example of enduring to the end with honor and grace. Orvaneil was born Feb 5, 1920 in Sulpher Bluff, Texas to John W Boyd and Maggie May Hays Boyd. During the great depression, she traveled with her family to Central Washington where she met and married Carl Jay Olson. They were married on Easter Sunday 1940 and resided for a few years in Selah, Washington. Carl and Orvaneil later moved to Union Gap, Washington and grew their family and businesses for 45 years. Mom worked alongside dad in their many business (ad) ventures, including but not limited to, a dairy, grocery store, taxi cab company and real estate development. She also worked as a bookkeeper to various businesses in town. After dad died in 1985 she married and survived Melvin Densley of Provo, Utah, Walter Snelgrove of Smithfield, Utah and Glenn (Duke) Gyllenskog of Smithfield, Utah and is presently survived by her loving husband and companion Carroll O. Hodges of Smithfield, Utah. Orvaneil was a convert to The Church of Jesus Christ of Latter-day Saints and served many years as a temple worker in the Provo, Utah Temple and the Logan Temple baptistery. Orvaneil was preceded in death by her eternal companion Carl Jay Olson, her father John W. Boyd, mother Maggie May Hays, step mother Ida Ruth Blankenbeckler and two sisters, Grace Van Scoyak and Falbia Woods both of Texas. She is survived by 6 children, Bonnie (Nile, deceased) Marshall, Warden Washington; Lon (Kathie) Olson, Walla Walla, Washington; Dan C. Olson, Union Gap, Washington; Rebecca (Randy) Johnson, Smithfield, Utah; Jayne (Spencer) Frost, Monticello, Utah and Heidi (Erik) Duffin, Smithfield, Utah; 23 grandchildren, 35 great-grandchildren and 13 great-great-grandchildren and growing. A viewing will be held from 6:00 – 8:00 pm., Wednesday, June 14, 2017 at the Smithfield LDS North Stake, 155 W 400 N, Smithfield, Utah. Funeral services will be held at 11:00 am., Saturday, June 17, 2017 in the Yakima Stake Center, 705 S. 38th Ave., Yakima, Washington. Interment will be at the Wenas Pioneer Cemetery, Wenas, Washington where Orvaneil will be laid to rest next to her husband Carl Jay Olson. Condolences may be expressed at www.bergmortuary.com.

Orvaneil Boyd Olson Densley Snelgrove Gyllenskog Hodges slipped quietly across the veil June 10, 2017 at the home of her daughter in Smithfield, Utah at 97 years young. She was an outstanding example of enduring to the end with honor and grace. Orvaneil... View Obituary & Service Information

The family of Orvaneil Boyd Olson Hodges created this Life Tributes page to make it easy to share your memories.

Send flowers to the Hodges family.