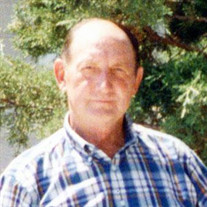 Orvil Perry Carter passed away November 5, 2017 in Provo, Utah due to complications from Dementia. He was born in Provo Utah July 7, 1931 to Vern and Maude Carter. He was the 5th of 7 children. During his early years and high school years he worked on the family farm and the Knudsen Farm, which he was always very proud of. He married Dorothy Dart and they had one daughter. They were later divorced. He married Geraldine Steggell and had 5 more children. He served in the U.S. Army from 1953 to 1955 during which he had a tour of duty in Okinawa. After his time spent in the military, he returned home and helped with the family farm and became employed at Geneva Steel Works where he served his apprenticeship to become a Boilermaker. He worked at Geneva Steel for 38 years from which he retired to take care of his ailing wife. He was an avid hunter and fisherman and loved to spend time in the outdoors with his family. His family was his greatest joy, from his children, grandchildren to his great-grandchildren. He loved to cook, pancakes and pies were his specialty, along with fish he caught and game he caught . He loved and was devoted to his family and to his parents and took very good care of them. He is survived his children: ArvaDale (Joe) Ashman, Perry Carter, Richard Carter, Verleen (Todd) Burnham, Pamela (Lance) Larsen, and Debra (John) Fillmore; 19 grandchildren; 22 great-grandchildren; sisters, Laverne Hancock and Betty Johnson and brother, Darwin (Clara) Carter. He was preceded in death by his parents; wife; brothers, Garn and Donald; sister, Helen; granddaughter, Sarah and daughter-in-law, Peggy. Graveside services will be held at 11:00 a.m., Thursday, November 9, 2017 at Timpanogos Memorial Gardens, 1000 North 400 East, Orem, Utah. A viewing will be held at the Berg Mortuary of Provo, 185 East Center Street, Wednesday, November 8 from 6:00-8:00 p.m. A family viewing and family prayer will be held Thursday morning from 9:30-10:30 a.m., preceding the graveside service. Condolences may be expressed at www.bergmortuary.com.

Orvil Perry Carter passed away November 5, 2017 in Provo, Utah due to complications from Dementia. He was born in Provo Utah July 7, 1931 to Vern and Maude Carter. He was the 5th of 7 children. During his early years and high school years he... View Obituary & Service Information

The family of Orvil "Art" Perry Carter created this Life Tributes page to make it easy to share your memories.