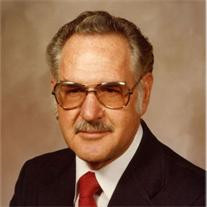 Owen Sterling Rich was born on March 16, 1922 in Paris, Idaho, the son of Milando Pratt Rich and Clara Elnora Kofoed. He graduated from Fielding High School also located in Paris. He developed interests in electronics, music and athletics. He was an Idaho State javelin champion. In 1940, he enrolled at Brigham Young University and was employed as a Radio Technician in Dr. T. Earl Pardoe's classroom radio studio. Eleven days after Pearl Harbor, he married his freshman sweetheart, Ora Nielson in the Salt Lake Temple. Both were born on the same day: March 16, 1922. Together they moved to Hill Field in Ogden, Utah, where Owen worked as an Aircraft Radio and RADAR technician and instructor. In 1943, he joined the U.S. Coast Guard and was assigned to the North Pacific Coast Guard Air Sea Rescue Service as Chief Aircraft Radio and RADAR technician. After the war in 1946, Owen was invited by T. Earl Pardoe to return to BYU and create a campus radio station. In 1952, Owen was sent to Hollywood by BYU President Ernest Wilkinson to learn about a new media called television and its implications for BYU. After accepting a scholarship and a teaching assistantship at the University of Southern California he moved his young family to Hollywood. He entered a new Telecommunication Graduate program at USC and was assigned to teach a class in Radio Broadcasting and assume the role of assistant to the producer of the USC and KNBC-TV Hollywood TV production, "The Halls of Science," obtaining a Master's Degree in the process. Owen then returned to BYU to assist in the development of Radio and TV at BYU and initiated the first efforts to begin FM and TV broadcasting. In 1960, Owen was awarded a Ford Foundation financial grant designed to assist and promote leadership in the growing field of instructional Radio and Television Broadcasting. After completion of a Doctorate Degree at Penn State University, Owen became intensely interested and active in the promotion of Instructional Radio and Television on a national level. He was elected to the Board of Directors of the National Association of Professional Broadcasting Education and later elected National Vice President of that organization (later known as the Broadcasting Education Association). At BYU, he initiated and directed the Communications Department Graduate Studies. Owen's professional priorities included the promotion of Broadcasting as part of the educational process, and preparing broadcasting students to make a positive impact on their profession, community and church. He also served the Utah State Board of Higher Education as Media Consultant and was a Visiting Professor at the University of Utah and BYU Hawaii. Owen received numerous awards, recognitions, and honors, but considered his greatest accomplishment to be the successes of his students. His church service included 15 years on the General Board of the LDS Church MIA Youth Organization, where he conducted youth leadership meetings throughout the world. He also served on the LDS Church Meeting House Library Committee, served an LDS Public Service Mission, and was a temple worker for many years. He was an accomplished outdoorsman and an avid gardener. Owen was a loving husband and father, and is survived by his children: Lance (Linda); Kate Kastrinakis; Craig (Mace); Julene (Ron) Sanders; Steve (Gina); and many beloved grandchildren, great grandchildren and a great-great grandson. Special thanks to Owen's dear friend Ruth Johnson, and the Johnson family for their friendship and comfort. Funeral services will be held at 11:00 a.m., Saturday, May 11, 2013 at the Pleasant View 9th Ward Chapel, 2445 North 650 East, Provo, Utah. Friends may call at the Berg Mortuary of Provo, 185 East Center Street, Friday from 6-8 p.m., and at the church Saturday from 9:30-10:45 a.m. prior to services. Interment, East Lawn Memorial Hills, Provo, Utah. Condolences may be sent through his obituary at www.bergmortuary.com.

Owen Sterling Rich was born on March 16, 1922 in Paris, Idaho, the son of Milando Pratt Rich and Clara Elnora Kofoed. He graduated from Fielding High School also located in Paris. He developed interests in electronics, music and athletics. He... View Obituary & Service Information

The family of Owen Rich created this Life Tributes page to make it easy to share your memories.

Send flowers to the Rich family.