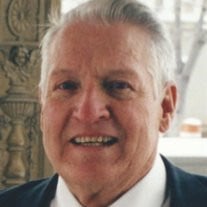 Owen Wayne Stout finished his work and returned to his Heavenly Father October 29, 2013, of causes incidental to age. He was born in Price, Utah on February 16, 1926, the eldest son of Wayne Dunham and LaRene Clark Stout. He graduated from South High School in Salt Lake City and served in the Atlantic and Pacific theaters during WWII as a Liberty Ship engineer in the Merchant Marines. Three days after returning home, he received his LDS mission call to the Southern States. On February 2, 1949, Owen married Colleen Engh in the Salt Lake Temple. They lived in San Pedro, California and were later settled in Orem, Utah, where they raised 10 children. He was an active member of the LDS Church and served in multiple callings throughout his life, including a bishop’s counselor, faithful home teacher and ward choir member. He also volunteered his time and expertise, tirelessly, and for many years at the Lakeridge Family History Center. He indexed tens of thousands of genealogical records over the years. During the last couple of years, he spent most of his time indexing nearly 20,000 additional names. He is survived by his wife of 64 years, Colleen, as well as 10 children: Lynn (Cindy) Stout, Kirtland (Launa) Stout, Shauna (Stephen) McConkie, Wayne (Trisha) Stout, Kari (Douglass) Hain, Jayne (Dale) Macpherson, Paul (Teryll) Stout, Andrea (Steven) Pederson, Martha (Daniel) Okerlund and Janna (Paul) Morrell; 71 grandchildren; 87 (and continuing) great-grandchildren; and siblings, David (Mildred) Stout, Richard (Reneé) Stout, Vaughn (Dolly) Stout and sister Maxine (Nathan) Barney. He was preceded in death by his brother, Monterey (Lois) Stout. He worked for 30 years at US Steel Geneva Works in the Production Planning Dept. He also owned Stout Appliance Service, in which he served the repair needs of families throughout Utah Valley for nearly 60 years. He semi-retired from this position on October 29, 2013. He loved tools and enjoyed repairing things. He always kept himself busy, working on whatever needed to be fixed or improved. (We always said his middle initial stood for Work!) Throughout his lifetime, Owen has exemplified a dedication to his family, faithfulness to his Church, service to his community and friendship to all. He was a veritable source of knowledge on a variety of subjects including history, genealogy, mechanics, music, geography, zeolite and just about any category on Jeopardy! He had a beautiful tenor voice and was recognized for his great singing talents (as a soloist, quartets and in choirs), often accompanied by his wife Colleen. He played the (musical) saw and harmonica, could repair nearly any appliance, built playground equipment, and was noted for his storytelling and keeping the entire house warm throughout the winter using only a wood-burning stove. Owen had a strong testimony of the Gospel of Jesus Christ and acted on that testimony through a lifetime of practical service to others. He was constantly doing good turns on a daily basis to countless people, often anonymously, which blessed us all. Funeral services will be held at 11:00 a.m., Monday, November 4, 2013 at the Hillcrest 3rd Ward Chapel, 1450 South 800 East, Orem, Utah. Friends may call at the church Sunday, November 3, from 6-8:00 p.m. and Monday from 9:30-10:45 a.m. prior to services. Interment, Orem City Cemetery. Condolences may be sent at www.bergmortuary.com.

Owen Wayne Stout finished his work and returned to his Heavenly Father October 29, 2013, of causes incidental to age. He was born in Price, Utah on February 16, 1926, the eldest son of Wayne Dunham and LaRene Clark Stout. He graduated from... View Obituary & Service Information

The family of Owen Wayne Stout created this Life Tributes page to make it easy to share your memories.

Owen Wayne Stout finished his work and returned to his Heavenly...

Send flowers to the Stout family.