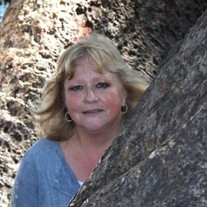 Pamela Kay Pulley was born in Lehi, Utah on July 10, 1955 to Lionel “Jay” Turner and Verla Kidd Turner. She graduated from Lehi high School in 1973, followed by additional college credits at Brigham Young University to pursue her love of working with children with special needs at American Fork Training Center and then later with adults with special needs at Danville. On July 20, 1973, Pamela was sealed to her high school sweet-heart and soul mate, Gilbert E Pulley, in the Provo Temple, and soon began her journey as a mother of nine loving children. She excelled at motherhood to such a degree that she would even take in the neighborhood strays. In her early years, Pam had a deep love of music, barrel racing, camping, and anything outdoors; something ingrained in her by her loving parents. She later took interest in other hobbies like doll making, ceramics, collecting novelty items, traveling, and obviously, spending time with her family. Overall, Pamela had a deep love of people and easily connected to strangers at every turn. If a stranger sat next to her on a plane, they would be friends by the time they landed. People were drawn to her radiant love and warmth, and extended that love equally. She had a strong testimony of her Savior and of the Great Plan of Happiness. When getting off the Center Street exit in Provo, she would always have the children sing “I Love to See the Temple” and “Families can be Together Forever” with the view of the Temple in the distance. She is survived by her husband, Gilbert E Pulley; her children Danielle (Jason) Pulley, Shane (Tricia) Pulley, Jeremy (Stacie) Pulley, Cameron (Alicia) Pulley, Chalice (Dennis) Pulley, Todd Pulley, Jessica (Dramane) Toure, Trevor (Tenette) Espinoza, and Alex (Evelyn) Dyer; brothers and sisters Gary (Colleen) Turner, Steven (Gail) Turner, Sandra (Dino) Robinson, and Cole (Deanne) Turner; and mother-in-law Veloy Pulley. She is returning home to her parents Lionel “Jay” Turner and Verla Kidd Turner; her father-in-law Earl Gilbert Pulley, her daughter-in-law Brendin K. Pulley, her sister-in-law Vicky Lynn Phillips, and her brother-in-law. She will be missed. We love you as many as the numbers, more than the numbers! Funeral services will be held at 11:00 a.m., Thursday, July 19, 2018 at the Town Hall Ward Chapel, 835 South 500 West, Provo, Utah. Friends may call at the Berg Drawing Room Chapel, 185 East Center Street, Provo, Utah on Wednesday, July 18, from 6-8 p.m. and at the church Thursday, from 9:30-10:45 a.m. prior to services. Interment will be in the Lindon City Cemetery. Condolences may be expressed at www.bergmortuary.com.

The family of Pamela Kay Pulley created this Life Tributes page to make it easy to share your memories.

Send flowers to the Pulley family.