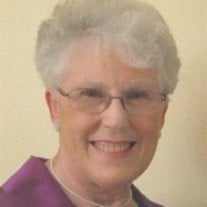 "Forever in our hearts and memories" Wherever she went, Pamela Margaret Rosamund Mason delighted others with her beaming smile, warm and cheerful disposition, bravery and strength, and joy in music. At 75, our cherished mother and grandmother passed on peacefully at home surrounded by many family members and in the thoughts and prayers of many more. Pamela was born November 3, 1937, in Luton, Bedfordshire, England, to Fritz Edmund Merry and Edna Violet Margaret Woodcock. Her older siblings, Jean Edna Merry, Maurice Edmund Merry and Geoffrey Arthur Merry, were delighted to welcome a little sister. Pam grew up ballet dancing, and loved to sing and accompany “Pop” while he worked in the garden. In 1957, Pam married John Ratcliff and had three children: Bernard Adrian Spencer Ratcliff, Susan Paula Denise Clark and Trudi Helen Elizabeth Drew. In 1968, she brought her children to the United States to begin a new life, joining her sister Jean. In 1972, Pam met Roger Williams Mason, with whom she would join families and share the rest of her life. Pam embraced his children as her own: Robin Lynn Hills, Russell Eric Mason and Rhonda Lee Mason. They were married in Salt Lake City, Utah, on May 16, 1972, and ultimately settled at Marrcrest in Provo, Utah. Pam was an active member of the LDS church and believed that the gospel through music was the best missionary tool. She and Roger served a mission in the Mascarene Islands, where she taught 35 disadvantaged children to play the piano. In 2000, at the age of 62, Pam earned a bachelor’s degree in music from BYU. She loved serving the church and held many roles, including missionary, Relief Society president, counselor, chorister and pianist. Pam dearly loved her husband, six children, and many grandchildren and great-grandchildren, as well as all of her many friends. She was adored by her husband, Roger, who passed away October 21, 2009. Through her husband’s illness and her own battle with cancer, Pam remained positive and continued to inspire others through service, music education and her upbeat outlook. Pam is survived by her brother Maurice, six children, 21 grandchildren, and 15 great-grandchildren. She was preceded in death by her husband Roger Mason, sister Jean, brother Geoffrey and parents. She will rest peacefully alongside Roger, with Jean’s urn in her casket. Funeral services will be held at 11:00 a.m., Saturday, September 7, 2013, in the Riverside Ward Chapel, 3511 North 180 East, Provo, Utah. Friends may call at the church from 9:30-10:45 a.m. prior to services. Interment, Provo City Cemetery. Condolences may be sent at www.bergmortuary.com.

"Forever in our hearts and memories" Wherever she went, Pamela Margaret Rosamund Mason delighted others with her beaming smile, warm and cheerful disposition, bravery and strength, and joy in music. At 75, our cherished mother and grandmother... View Obituary & Service Information

The family of Pamela Margaret Rosamund Mason created this Life Tributes page to make it easy to share your memories.

Wherever she went, Pamela...

Send flowers to the Mason family.