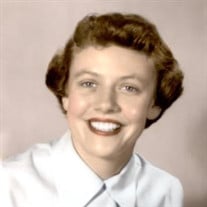 Patricia Randall Allsen, died Tuesday, March 15, 2022 at her home in Provo, Utah. She was 88 years old. Pat was born on April 11, 1933 to parents Horace Jack Randall and Gladys Wood in Inglewood, California. At a very young age, the family moved to Rexburg, Idaho to begin a life of farming. She graduated from Madison High School in Rexburg where she was involved in student leadership and was part of the marching band. Pat attended Ricks College, which is the place where she met her eternal companion, Philip Allsen. The two dated for two years before they were married on June 4, 1954 in the Idaho Falls Temple. Phil and Pat spent their early years traveling around the country to fulfill Phil’s duties in the service and complete his education. The couple eventually made their permanent home in Provo, Utah where Phil taught at BYU. She was a generous and authentic person that believed in service. Countless people benefitted from her compassion. This sincere interest in the welfare of others was apparent in every aspect of her life. You did not meet or talk to Pat without her asking about your life, your interests, or your needs. She remembered your name and she would know you personally. Every conversation ended with a thank you and a kind word of support. It can be said that Pat appreciated everyone and was sincerely interested in other people’s happiness. This was a gift that served her well in all her relationships and was a deep expression of her love for the gospel of Jesus Christ. More than anything else, Pat LOVED her family, it was her gift. This love was expressed in her conversations, her sweet hugs, her caring gestures, and the way she made sure everyone was happy. Taking care of her companion, Phil, was always the focus. They were true friends and she often expressed her love and appreciation for his care of her. Measures of devotion such as waking up before Phil to make sure he was ready for the day, managing the affairs of the home, and sharing their love of BYU and various sports teams were just a few examples. Pat is survived by her husband, Philip Allsen of 68 years, two children, eight grandchildren, and 14 great grandchildren. Pat will be greatly missed by her sister Jackie, numerous family members. Funeral services will be held at 11:00 a.m., Friday, March 18, 2022 at the Edgemont Stake Center, 303 West 3700 North, Provo, Utah. A viewing for friends and family will be held from 9:00 to 10:45 a.m. prior to services. Interment will be held at Eastlawn Memorial Hills Cemetery. Condolences may be expressed at www.bergmortuary.com.

Patricia Randall Allsen, died Tuesday, March 15, 2022 at her home in Provo, Utah. She was 88 years old. Pat was born on April 11, 1933 to parents Horace Jack Randall and Gladys Wood in Inglewood, California. At a very young age, the family... View Obituary & Service Information

The family of Patricia Randall Allsen created this Life Tributes page to make it easy to share your memories.

Send flowers to the Allsen family.