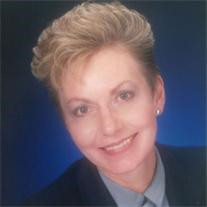 Patricia Jean Bliss, age 70, loving mother, grandmother, aunt, sister, daughter and friend to many, passed away on May 22nd, 2011 at 6:00 am after a long and courageous battle with ovarian cancer. Her illness was a result of “Downwinder” exposure to radiation in the early 60’s. Pat was born at 6:00 am on March 17th, 1941 in American Fork, Utah to Neils Leroy Sundquist and Thora Jean Taylor. She married Arthur Dwight Bliss on May 21st, 1961 in Las Vegas, NV. Pat and Dwight settled in Northern Arizona where their children, Sharon and John, were born. Pat later divorced and moved back to Utah to be closer to her family. Pat received an Associates degree at Utah Technical College in 1979. Pat’s professional history included working with financial planner, Howard Ruff; Osmond Studios; Utah County Sheriff’s Dept; Rocky Mountain Helicopter and the Fourth District Juvenile Court. Pat enjoyed the outdoors, travel, art, music, movies, flowers, bowling, snow skiing, white water rafting, dining out…and ice cream. One time Pat even drove from Page, AZ to Kanab, UT for a chocolate milkshake. Most of all Pat enjoyed time with her friends and family and she would travel many miles to be together. Pat was preceded in death by her mother, Thora Singleton. Pat is survived by her step-dad Doyle Singleton(Gloria); her brother Jeff Anderson(Maria); her sisters Theresa Pedersen(Bart) and Valerie Vickers; daughter Sharon Rook(Randy); son John Bliss; 3 grandchildren, 2 great-grandchildren and numerous aunts, uncles, cousins, nieces and nephews. Special thanks to the staff at Beehive Homes in Provo, Utah Home Health & Hospice and Pat’s close friends who provided kind and loving care in her final weeks and days. A celebration of Pat’s life will be held Saturday, May 28th at 11:00am, at the Berg Drawing Room Chapel, 185 East Center St., Provo, Utah. Family and friends may join us for a viewing one hour prior to services. Burial will follow at Evergreen Cemetery in Springville. Condolences to the family may be sent from www.bergmortuary.com. In lieu of flowers, donations can be made to the American Cancer Society or your favorite charity.

Patricia Jean Bliss, age 70, loving mother, grandmother, aunt, sister, daughter and friend to many, passed away on May 22nd, 2011 at 6:00 am after a long and courageous battle with ovarian cancer. Her illness was a result of “Downwinder” exposure... View Obituary & Service Information

The family of Patricia Bliss created this Life Tributes page to make it easy to share your memories.

Send flowers to the Bliss family.