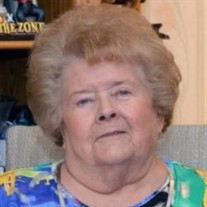 Patricia “Pat” Johnston Kauffman, 83, of Orem, died in her home at 11:45 a.m. Tuesday, July 13, 2021 after a lengthy illness. Pat was born on September 26, 1937, in Ogden, Utah, to Harlin Davis and Irma (Beasley) Johnston. She grew up and received her education in Provo and graduated from high school there. She attended BYU and graduated in English and Education. Later, she completed her master’s degree in Library Science and became the high school librarian. Pat excelled as an educator. She taught three years in Bountiful and then found her real education home in Springville. She was either loved if you liked work and excellence or despised if you didn’t. She set a standard that she imparted through AP classes and had many students who excelled with her imparted philosophy of “nothing less than your best was good enough.” She defended students and faculty alike as she became a cornerstone at Springville High. She never sought accolades but counted students she befriended and rescued as her awards. Many of them are still close friends and she made them a part of her family. One of her students summed her up as a “great reader of humans.” She married John Kauffman on January 17, 1964, and they spent their married life in Utah County. They had no family of their own, so Pat adopted her students as her family. She compensated for her local roots by traveling the world. She had a real wanderlust that took her to much of the world and her favorites were Europe and Africa. She often took others along with her to show them her love of people and cultures. After retirement, Pat turned her love of youth and children to the families of her nieces and nephews. It didn’t take her long to become the favorite sibling and many of the young children learned to say ‘Aunt Pat’ or ‘Pat’ before their vocabulary reached 30 words. Many would ask to visit Pat when they were given a choice to go somewhere. With older Great Grandmas struggling with health issues, she became the replacement Great Grandma for some of the youngsters. She was proceeded in death by her husband. She is survived by three siblings, Dee Johnston of Draper, Caren (Scott) Anderson of Delta, Colleen (Russ) Peterson of Orem; nieces and nephews: Matt (Carrie) Johnston, Jennifer (Alex) Smith, Jason Johnston, Kelly (Jim) West, Dan (Terri) Nielsen, Lisa Nielsen, Jill (Craig) Guymon, Josh (Aubree) Nielsen, Julie (Blaine) Burraston, Tiffany Nielsen, Michelle (Alain) Templeman, Russell (Veronica) Peterson, Kerry Lynne (Spencer) Shaw, and Michael (Karie) Peterson; 16 grandnieces and 25 grandnephews. A visitation will be held at 1:00 p.m., Thursday, July 29, 2021 at the Berg Drawing Room Chapel, 185 East Center in Provo, followed by an informal but organized memorial at 2:00 p.m. (same location). Following the memorial service, Berg Mortuary will post a link to a video of the memorial; there will not be a live zoom link. Interment of her remains will take place at 1:00 p.m., Friday, July 30, 2021 in the Hooper City Cemetery, 5301 South 6300 West, Hooper, Utah. It will be followed by an informal visitation of family and friends at the Hooper Park, 5600 South 6300 West, Hooper. No food will be provided. Condolences may be expressed to the family at www.bergmortuary.com.

The family of Patricia "Pat" Johnston Kauffman created this Life Tributes page to make it easy to share your memories.

Send flowers to the Kauffman family.