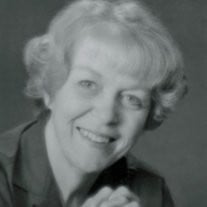 Patty Joy Hiatt Gurule, 76, of Provo, died September 3, 2013. She was born March 30, 1937 in Mt. Airy, North Carolina, to Dennis Monroe and Bertha Mae Bingman Hiatt. She attended schools in Mt. Airy and Provo, graduating from Provo High School in 1955. She also attended BYU, Stevens Henager College, and UVSC. She married Henry G. Gurule on April 4, 1958 in Provo. She was a member of The Church of Jesus Christ of Latter-day Saints. Most recently she served as a visiting teaching coordinator. She organized the Utah Valley Chapter of the Utah State Poetry Society in 1976 and served two terms as President. She was a member of various poetry and writing groups. Her book of poetry, Utah Diary, was published in 1997. She is survived by two children, D. Paul (Trudy) Gurule of Provo and S. Shane Gurule of Mammoth Lakes, California, seven grandchildren, six great-grandchildren, and sister Sherry Wadham of Provo. She was preceded in death by her parents, husband, daughter Sherry “Toni” Scott, and sister Mona Fay Ritter. Funeral services will be held at 11:00 a.m., Monday, September 9, 2013 at the Bonneville 1st Ward Chapel, 85 South 900 East, Provo, Utah. Friends may call from 9:30-10:45 a.m. prior to the services. Interment will be in the Provo City Cemetery. Condolences can be sent to www.bergmortuary.com.

The family of Patty Joy Hiatt Gurule created this Life Tributes page to make it easy to share your memories.

Send flowers to the Gurule family.