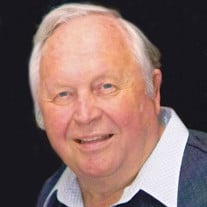 George Paul Buchanan, Our beloved father, grandfather and husband, passed away on August 3, 2014 in Provo, Utah at the age of 80 from complications from Parkinson's. Though disease may have disabled his body, it never broke his spirit. He was still the same patient, kind, lovable and witty man to his last breath. Paul was born January 26, 1934 in Salt Lake City, Utah to Edna Louise Gannett and Dr. George Woodward Buchanan. He was preceded in death by daughter, Annette and sister, Barbara Louise Buchanan Tuttle. He is survived by his wife, Momi Clissold Buchanan and five children: Shauna Buchanan of Provo, UT; Michelle Noskowski (Ed) of Los Gatos, CA; Renee Tribe (Troy) of Lindon, UT; Lisa Buchanan of The Woodlands, TX; and Brad (Erin) of Murfreesboro, TN. Beloved grandfather to Morgan, Mary Anne, Natasha, Christina, Geoffrey, Stewart, Cameron, Caroline, William, Kaylene, Glen, Elizabeth and Ryan. Great-grandfather to Kingston, Kathleen and Maxwell. Paul married his East High School sweetheart, Momi, on November 25, 1957 in Salt Lake City. He graduated in 1958 from the University of Utah, in Electrical Engineering and a member of Sigma Chi. He then served in the Utah National Guard and U.S. Air Force flying F-86 & F-100 jet fighters. In fact, the actual F-86 jet he flew is on display in front of the Utah National Guard building in Draper, which can be seen from I-15. For 35 years, Paul was a Captain & Instructor with United Air Lines out of San Francisco. Some of the aircraft he flew were the DC-6, DC-10, 727, 767, and his favorite, the 747-400. His love of flying was evident throughout his life as many of the talks and lessons given used airplane analogies. He spent many hours with his only son, Brad, building and flying radio-controlled airplanes. Paul was known for his perfect impersonations of John Wayne and Jimmy Stewart when he made announcements from the cockpit, redefining the meaning of "inflight entertainment". Paul & Momi raised their family in Saratoga, CA. Paul was a faithful member of The Church of Jesus Christ of Latter-day Saints. He enjoyed serving in a variety of church callings such as bishop, scoutmaster, mission leader, teacher, and stake presidency counselor - influencing countless lives with his love of people and the Gospel of Jesus Christ in the Saratoga, California Stake. In October of 2006, Paul and Momi served as missionary companions in the California San Jose Mission. Perhaps the best calling of all was his example of a loving and devoted father and husband. His example of a lifetime of gospel living was reflected in those he taught, guided and loved. Sincere thanks to Monica, Malene and Kiah of Envision Home Care for their compassionate and tender care given to Paul during his illness. Funeral services will be held at 12:00 noon, Saturday, August 9, 2014 at the Foothill Ward Chapel, 345 East 4525 North, Provo, Utah 84604. Family and friends may visit at the Berg Mortuary of Orem, 500 North State Street, Friday, August 8, from 6-8:00 p.m. and at the church Saturday, from 11-11:45 a.m. prior to services. Interment, Salt Lake City Cemetery. Condolences may be sent to the family at www.bergmortuary.com. In lieu of flowers, donations can be made to Wounded Warriors Project or Envision Hospice at 801-225-7971. Dad, you have definitely "earned your wings" and will be flying high!

George Paul Buchanan, Our beloved father, grandfather and husband, passed away on August 3, 2014 in Provo, Utah at the age of 80 from complications from Parkinson's. Though disease may have disabled his body, it never broke his spirit. He was... View Obituary & Service Information

The family of Paul Buchanan created this Life Tributes page to make it easy to share your memories.

Send flowers to the Buchanan family.