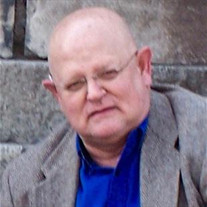 Paul Harris Chamberlain, son of George S.H. Chamberlain and Ursula Ineva Callantine departed from this life on May 25, 2017 at the age of 67. He leaves behind an older brother, Bruce (Karen) Chamberlain, 4 children: Sheila (Mark) Reed, Ethan Chamberlain, Tania (C.J.) Sorenson, and Marc Chamberlain, and 8 grandchildren: Tristen, Braden, Camden, Clara, Everett, Madison, Mitchell, and Athena. Paul was born October 16, 1949 in Orofino, Idaho, and grew up in California. As a youth, his hearing began to fail, declining through his adult years. Eventually he became deaf. Paul earned a BA in Drama and an MA in Educational Counseling, both from BYU. He was an advocate for the Deaf. In the 70’s, he was a lead protester at BYU against the lack of accessibility to Deaf students who used ASL and was instrumental in important policy changes. He also helped to organize the first ASL classes on campus. He worked as a college counselor for disabled students at Pima Community College for more than 20 years. Paul served in various capacities as a member of The Church of Jesus Christ of Latter-day Saints, including as a full-time missionary in England and California. He helped to re-establish a branch for the Deaf in Provo, UT, and helped create a branch of the Church for the Deaf in Illinois. He served as a Branch President in Chicago, Branch Clerk and Executive Secretary in Phoenix, and most recently as an Ordinance Worker in the Provo Temple. He participated in the development of Church curriculum in American Sign Language in the 1980’s. He was involved in writing and producing the very first ASL Church video, “And They Shall Have Joy”. Paul was a big sports fan, loved old musicals, photography, his family, and the gospel of Jesus Christ. Funeral services will be held Thursday, June 1, 2017 at 11:00 a.m. at the Utah Valley Ward Chapel, 888 South Freedom Blvd, Provo, Utah. There will be a visitation with the family from 10-10:45 a.m. prior to services. Interment will be in the Salt Lake City Cemetery. Condolences may be expressed at www.bergmortuary.com.

Paul Harris Chamberlain, son of George S.H. Chamberlain and Ursula Ineva Callantine departed from this life on May 25, 2017 at the age of 67. He leaves behind an older brother, Bruce (Karen) Chamberlain, 4 children: Sheila (Mark) Reed, Ethan... View Obituary & Service Information

The family of Paul Harris Chamberlain created this Life Tributes page to make it easy to share your memories.

Send flowers to the Chamberlain family.