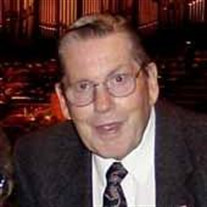 On the morning of December 24, 2014, Paul Gerald Mann passed away peacefully at the age of 83, due to an infection suffered while dealing for many years with Parkinsons disease. Paul was born April 16, 1931, in Kaysville, Utah, to Gerald and Ruth Mann. He was the oldest of three children. He graduated from Davis High School, where he participated in sports, and he attended Brigham Young University. He was an active member of The Church of Jesus Christ of Latter-day Saints, and served faithfully in many callings, including a full-time mission to Long Beach, California. He married Alice Richey in the Mesa LDS Temple, and together they raised six children in Utah and California. He was self employed most of his life, working as a ceramic tile contractor in California, and as the owner of a printing store in Utah. Paul was an avid outdoorsman. He took his family on many camping, hunting, fishing and horseback riding trips, as well as many vacations in the family motor home. He was very charitable, always giving his time and resources to help out others. When the effects of his debilitating illness took its toll on his body, Paul never showed signs of giving up, and always had a positive outlook on life, no matter the adversity. For those traits, as well as many others, he will be remembered, and greatly missed. Paul is having a glorious reunion with his parents, his son David, and his grandson Cameron Williams, who preceded him in death. He is survived by his wife, his children, daughter Paula Williams, daughter-in-law Nancy Mann, daughter Rhonda (Roger) Jeppsen, son Howard (Nancy), daughter Marie (Paul) Neubert, son Tyler (Twilla), 29 grandchildren, and 19 great grandchildren. A viewing will be held on Wednesday, December 31st, from 9:30am to 10:30am., at the Lakeview 8th Ward Building, 1600 South 155 West, Orem, Utah, followed by funeral services at 11:00am. Interment will follow at the Orem City Cemetery. In lieu of flowers, donations in his name may be given to the LDS Missionary Fund.

On the morning of December 24, 2014, Paul Gerald Mann passed away peacefully at the age of 83, due to an infection suffered while dealing for many years with Parkinsons disease. Paul was born April 16, 1931, in Kaysville, Utah, to Gerald and... View Obituary & Service Information

The family of Paul Gerald Mann created this Life Tributes page to make it easy to share your memories.

Send flowers to the Mann family.