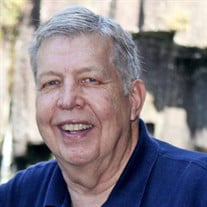 Paul Warren Morris, 74, passed away at home on Monday, January 11, 2016. He was born in Sterling, Colorado on July 16, 1941 to Fred Winfield and Elma Katherine VanHousen Morris. Paul was active in high school playing the trombone, basketball, and going to state in tennis. He graduated in 1959 from Sterling High School and has stayed in contact with many of his friends for over 50 years. Paul went to Colorado University where he received his bachelor’s degree in Sociology and Psychology. He met his sweetheart in 1962 at CU. He married Sharon (Sherry) Lynne Bateman on November 17, 1963 in Rinn, Weld, Colorado. He was later sealed to her in the Salt Lake City Temple on August 24, 1970. Together they have four children: Michael Dane (Kimberly), Kristen Ann Lauritzen (Christopher), David Paul (Katrina), and Jennifer Lyn Sullivan. He is also survived by his sister Faith Cochran and ten grandchildren. After joining the Church of Jesus Christ of Latter-day Saints in 1969, he moved his young family to Provo, Utah in 1972. He moved his family with no job, no home, but with a lot of faith for a better environment for his family. Paul secured employment with the Provo School district at Central Utah Enterprises (CUE) and worked for them for 27 years. CUE is a sheltered workshop that helps those with mental disabilities. Paul has touched the lives of countless special spirits through his love, time and gentle caring. He loved BYU athletics and rarely missed watching BYU play. He loved musicals, theater, and other quality fine arts performances. Paul spent countless hours researching his ancestors and networking with others across the country to accomplish valuable genealogy work. His time spent outside of work and service was mostly filled by spending time at his children’s events and helping them with their activities. Paul was actively involved in the Church of Jesus Christ of Latter-day Saints. He served as a BYU bishop, counselor in bishoprics, a high councilor, and various other positions. He fulfilled a service mission with Sherry at the LDS Conference Center in Salt Lake City and served as a temple ordinance worker in the Provo Temple. When he passed away he was serving as a sacrament service coordinator for a local assisted-living center. Paul retired from CUE at the age of 60. For the last 14 years, he traveled extensively with his wife Sherry. He had the opportunity to see many of God’s beautiful creations and meet many wonderful people. He traveled to the four corners of the earth and saw every continent in the world. He spent countless hours with his children and grandchildren. Paul was a humble and compassionate man. He had a firm testimony of the gospel of Jesus Christ and was always looking for opportunities to share his love of it. He is remembered by his family as a gentle giant. He never wanted to impose on anyone and always put others first. His sense of humor was contagious and everyone loved being around him. His sacrifice and love for his family cannot be measured and he spiritually led the way with quiet nobility. Funeral services will be held at 11:00 a.m., Monday, January 18, 2016 at the Bonneville 12th Ward Chapel, 715 South Utah Ave., Provo, Utah. Friends may call at the Berg Mortuary of Provo, 185 E. Center Street, Sunday, January 17 from 6-8:00 p.m. and at the church Monday from 9:30-10:45 a.m. prior to services. Interment will be at the Provo City Cemetery. Condolences may be extended to the family at www.bergmortuary.com. In lieu of flowers, please consider a donation to the Church of Jesus Christ of Latter-day Saints through www.lds.org or to Shriners Hospital at http://www.shrinershospitalsforchildren.org/

Paul Warren Morris, 74, passed away at home on Monday, January 11, 2016. He was born in Sterling, Colorado on July 16, 1941 to Fred Winfield and Elma Katherine VanHousen Morris. Paul was active in high school playing the trombone, basketball,... View Obituary & Service Information

The family of Paul Warren Morris created this Life Tributes page to make it easy to share your memories.

Paul Warren Morris, 74, passed away at home on Monday, January...

Send flowers to the Morris family.