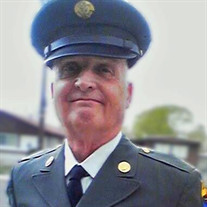 Paul Earl Scott, 77, of Provo, Utah, formerly of Deming, New Mexico, passed away on June 25, 2019 due to complications from a stroke. Paul was born December 10, 1941 to Earl Edgar Scott and Mildred Sara Scott (nee Andrews) in Adrian, Michigan. He... View Obituary & Service Information

The family of Paul Earl Scott created this Life Tributes page to make it easy to share your memories.