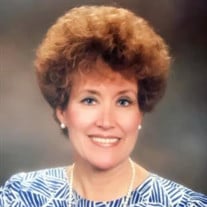 Paula Aileen Borget Trewartha Lamoreaux (85) passed away in Provo, Utah, on Tuesday, April 7, 2020. She was the first child born to John Raymond and Ione Hickman Borget on July 16, 1934. She had one brother, John David (Darlene) and two sisters, Connie (Dennis Wilberg) and Elaine (Larry Batty and Bob Jackson). In October of 1958 she married Robert Tracy Trewartha in the Salt Lake Temple. Four children were born to their union, Robert Drew (Joni), Sean William (Laura), Mark Tracy (deceased), and Nathan David (Christi). Bob and Mark died in an automobile accident in 1972. In June of 1989, Paula married Thomas Cardon Lamoreaux. She loved having his children join her family: Marcie (Todd) Bills, Sunny (Darin) Brannin, Andy (Jennifer) Lamoreaux, and David Lamoreaux. Paula has 21 grandchildren and 7 great-grandchildren. In addition to her husband and son, Paula was preceded in death by her granddaughter, Brooke, her parents, and both sisters. As a child, Paula was very creative and loved to write and act in many plays. Her brother was the chosen one who had to be in her plays, much to his chagrin. The plays were acted out in the garage with sheets to separate the stage. One of her childhood memories of her mother was when she brushed and curled Paula’s long hair into ringlets every day. Paula attended Provo City schools and enjoyed the many friends she met there. She graduated from Provo High in 1952, then graduated from BYU in 1956 with her teaching degree. She was an inspired and dedicated teacher who taught 1st, 2nd, and 4th grades in the Alpine School District for 35 years. After retiring, she spent over 10 more years as a substitute teacher. Paula influenced and touched the lives of many students through the love she had for them and cared for their intellectual welfare. Paula has always loved children and liked to talk to them. She made many friends with children in her classes and wards. Tom and Paula have had many happy years together traveling to almost all the states, and to Spain, Italy, Iceland, Greenland, Canada, Norway, and China, just to name a few of the countries they visited. Paula was an active member of The Church of Jesus Christ of Latter-day Saints and served with Tom in the South Provo Stake for nearly seven years as service missionaries with the 12-Step Addiction Program every Saturday and Sunday night. She had a strong testimony of the gospel and knew of the love Heavenly Father has for all his children. She served in many callings in the church and, because of that, she said the Lord taught her many things she wanted to know. She especially loved being the Primary music leader. Paula’s many church callings also included Jr. Sunday School, Primary President, Cub Scouts, MIA Counselor, Achievement Day Leader, Roadshow Director, and many more. She loved learning new songs and teaching them in primary and to her elementary school students. Paula loved to have children perform in plays, having them dancing and singing. They all were stars, as they each had the same amount of time for each number. Many children’s self-esteem soared as they outdid themselves performing. Paula loved to dance in the arms of her husbands where they lit up the dance floor. She also loved ballet, modern, and tap dancing. She was a member of Jean’s Golden Girls for several years as they performed at events all across the country. Paula was an avid reader from the time she learned how and loved her neighborhood reading club. She said if she didn’t read every day she felt her spirit would die, even if it was just reading the milk carton and cereal box. Condolences may be expressed at www.bergmortuary.com.

Paula Aileen Borget Trewartha Lamoreaux (85) passed away in Provo, Utah, on Tuesday, April 7, 2020. She was the first child born to John Raymond and Ione Hickman Borget on July 16, 1934. She had one brother, John David (Darlene) and two sisters,... View Obituary & Service Information

The family of Paula Aileen Borget Trewartha Lamoreaux created this Life Tributes page to make it easy to share your memories.

Send flowers to the Lamoreaux family.