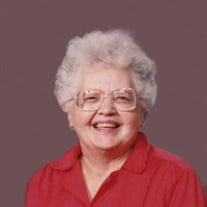 Phyllis Elsie Booth Phillips, 89, died peacefully at home on April 18, 2014. Her grandparents, Richard Thornton and Elsie Edge Booth had 61 grandchildren, and can now welcome her, as their last remaining grandchild returns to them. Born May 31, 1924, in Provo, Utah, the youngest daughter of Alfred Lewis Booth and Edith Harriet Young Booth, her being the fourth child of her mother and the sixth child of her father. She married Carlos Albert Phillips on September 6, 1944, in the Salt Lake (LDS) Temple. Apostle John A. Widtsoe performed the marriage and later a reception was held that evening at the home of the bride’s parents. Phyliis was educated in Provo, Utah, attending BYU Training School, Dixon Junior High, Provo High and BYU, with a brief stint in McKinnon, Wyoming. Many of her childhood friends from school remained lifelong friends, and she continued to correspond with them throughout her life. Active in the LDS church, Phyllis did extensive genealogy research and held various callings teaching in Relief Society, Sunday School and Young Women. One of her favorite callings was as the speech and drama director for MIA which included writing and directing for the road shows. She and her husband also spent one winter working at the temple in St. George. Phyllis worked for The Daily Herald for about thirty years holding various positions. She started out as a proof reader, which came in handy with her grandchildren when they wanted to be assured an A on their paper. Her other positions included: Society Editor, Girl Friday, Entertainment Editor, and Obituaries. Writing obituaries was one of her favorite jobs at The Herald because she was able to catch a glimpse of each persons life. Phyllis was an amazing storyteller and had a great sense of humor, she always said, “Why ruin a good story with the truth?” She was also an avid reader, often reading a book a day. Survivors are her son, Stephen L. Phillips, Montpelier, Idaho, daughters; Mrs. David (Barbara) Badger, Carson City, Nevada, Debra Phillips, Orem; Mrs. Lora Lark Michl, Council Bluff, Iowa, and Mrs. Matthew (Carla) Azure, Williston, N.D. She has 24 grandchildren and 40 great-grandchildren. Funeral services will be held at 10:00 a.m., Saturday, April 26, 2014 at the North Park 1st Ward Chapel, 101 West 800 North, Provo. Friends may call on Friday evening from 6-8:00 p.m. at the Berg Mortuary, 185 East Center Street, Provo and on Saturday morning at the church from 9-9:45 a.m. Interment, Provo City Cemetery. Condolences may be sent online at www.bergmortuary.com.

Phyllis Elsie Booth Phillips, 89, died peacefully at home on April 18, 2014. Her grandparents, Richard Thornton and Elsie Edge Booth had 61 grandchildren, and can now welcome her, as their last remaining grandchild returns to them. Born May... View Obituary & Service Information

The family of Phyllis Elsie Booth Phillips created this Life Tributes page to make it easy to share your memories.