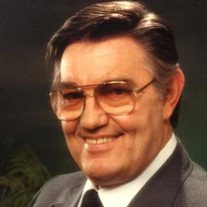 R. Blaine Frazier, age 84, died on December 22, 2016 in Alpine, Utah. Born June 1, 1932 in Woodruff, Rich County, Utah to Rene Dillon and Annie Lavelle Foote Frazier. He moved to Springville at the age of 7 and attended school there through the 12th grade. He worked on his father’s farm and for other farmers. The farm had various crops, including grain, alfalfa, sugar beets, corn, beans, onions, and carrots; mostly contract crops for the cannery. They raised livestock, including cattle, hogs, sheep, and egg-producing chickens. The farm had fruit orchards and pasture land. Most of the work was accomplished using horses. In 1952, he married Renae Bunnell from Lakeview, whom he met at BYU. Their marriage was later solemnized in the Provo LDS Temple. Both then worked at the Geneva Steel plant. They lived in Springville, Pleasant Grove, Provo, Orem, and Alpine over their married lives. Blaine won a scholarship in art and attended BYU for two years. He worked for local merchants such as Ahlanders, Sears, and Naylor Auto. He then went to work for US Steel at Geneva and remained there for 42 years, with 3 additional years as a consultant. He worked his way up through the ranks and became Superintendent of Finishing and Auxiliary Maintenance. He was a self-taught draftsman and mechanical designer and assisted in many engineering and improvement projects over the years. He was instrumental in designing and developing many innovations to modernize in the Geneva Steel Rolling Mills. After the sale of Geneva in 1988, he became Manager of Purchasing and then became a consultant on the Rolling Mill Modernization Projects. He was fortunate to travel extensively during these years, having business trips to many countries. After retirement, he opened an art gallery in Provo at Cotton Tree Square, where he painted, bought, and sold art for many years. He was successful in his artistic efforts, becoming a professional artist with his works being widely sold in the US. He began as a wildlife artist, and later became skilled in landscapes and still-life scenes. He was widely recognized and received many awards for his work. He served in many organizations, including the Association of Iron and Steel Engineers (AISE), in which he twice served as Utah Section Chairman and National Director. He was Chairman of the Utah County Young Republicans, a Director at Riverside Country Club, and served on the Utah County Art Board and Utah Valley Artist Guild. He excelled in many outdoor sports and became a very good bowler, hunter, and fisherman. He was an outstanding low-handicap golfer for many years and served as a Director for the Timpanogos Golf Association. He was a charter member of the Hobble Creek Golf Association and helped get that course going. He assisted with the Provo Open for many years. His larger-than-life personality made him many friends over the years in his golf, sport, and art endeavors. He was a member of The Church of Jesus Christ of Latter-day Saints, serving as Ward Clerk, Executive Secretary, and Second Counselor in the Manila Stake Third Ward. In Provo, he served as Executive Secretary to the High Priest Group Leader. In Orem, he served as the High Priest Group Leader in the Pleasant View 6th Ward. Blaine is survived by two sons, Roger Blaine II (Jennifer), and Riley B. (Cindi) Frazier; a brother Allan Frazier; two sisters Patricia (Stewart) Ivie and Carol Mitchell. He has six grandchildren and one great-grandchild. He was preceded in death by his parents, his wife Renae, his brother Robert LeGrande Frazier (Lucille), and brother Ernest Charles Frazier (infant). Funeral services will be held at 11:00 a.m., Friday, December 30, 2016 at the Berg Drawing Room Chapel, 185 East Center Street, Provo, Utah. Friends may call at the mortuary Thursday, December 29, from 6-8:00 p.m. and Friday from 10-10:45 a.m. prior to services. Interment, Provo City Cemetery. Condolences may be expressed at www.bergmortuary.com.

R. Blaine Frazier, age 84, died on December 22, 2016 in Alpine, Utah. Born June 1, 1932 in Woodruff, Rich County, Utah to Rene Dillon and Annie Lavelle Foote Frazier. He moved to Springville at the age of 7 and attended school there through... View Obituary & Service Information

The family of R. Blaine Frazier created this Life Tributes page to make it easy to share your memories.

Send flowers to the Frazier family.