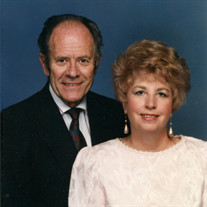 On August 3, 2016, our beloved father, R. Gerald Stewart (Gerry) of Provo, Utah peacefully passed away surrounded by his family. Gerry was born on April 13, 1933 in Provo, Utah to Reed B. and Thelma J. Stewart. Gerry loved sharing fond memories of his family moving to Reno, Nevada where at age 9 he started selling the Reno Gazette Newspaper, ultimately making his route the largest in the Reno area. He had a strong work ethic throughout his life. After graduating from high school, Gerry enlisted in the United States Navy and was proud to serve his country. While attending BYU, he met the love of his life, Myrna L. Harmon. They were engaged in 1954 and married in the Salt Lake Temple on June 8, 1955. Gerry worked for Hercules Aero Space for 30 years until retirement. His interests were gardening, reading, handyman and BYU sports. As a member of the LDS Church, he served faithfully in many callings, as well as ward clerk under 4 bishoprics. Gerry is survived by 4 children: Darryl R. (Tonia) Stewart, Shawna (Mike) Balli, Michelle Stewart, and Jeffrey R. (Christen) Stewart; 13 grandchildren and 12 great-grandchildren. He was preceded in death by his wife, Myrna; parents; and brother, Floyd. A special thank you goes out to family, friends, and hospice staff who have been instrumental in his loving care. Funeral services will be held at 11:00 a.m., Monday, August 8, 2016 at the Berg Drawing Room Chapel, 185 East Center Street, Provo, Utah. Friends may call from 9:30-10:50 a.m. prior to services. Interment, Provo City Cemetery. Condolences may be expressed at www.bergmortuary.com.

The family of R. Gerald "Gerry" Stewart created this Life Tributes page to make it easy to share your memories.

Send flowers to the Stewart family.