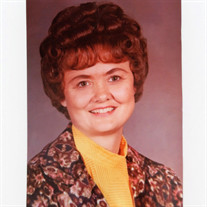 Our Loving mother, Rada Bronson Hutchison, passed away peacefully at home surrounded by her family, March 9, 2018 at the age of 86. She is survived by her loving husband of 68 years, Wallace Winchester Hutchison, her six children: Linda Stripling, Robert Hutchison (Holly), Michael Hutchison (Tafel), Bret Hutchison (Becky), Julie Hale (Richard), Jill Birrell (Scott); 18 grandchildren, 13 great-grandchildren, and one brother, J. Gerald Bronson. She is enjoying her reunion with her musical family and is now singing through the eternities. Rada was born in Almo, Idaho on January 29, 1932 to Wesley Reid Bronson and Margery Taylor Bronson. She was the second oldest child of seven children. Her family had a love of music and they could all play many different instruments. Rada often said that her brother J. Gerald Bronson had the best voice and that he could have had a professional career. Beautiful harmonies were heard if you attended her family reunions. Rada met her eternal companion, Wallace Winchester Hutchison in Malta, Idaho. They were married in the Salt Lake Temple, January 30, 1950. They met in grade school when Wally was six and Rada was 5 years old and then married right out of High school. Rada was a faithful member of The Church of Jesus Christ of Latter-day Saints. She loved to read and never missed a day of her daily scripture study. Rada wrote in her journal daily and that was something she treasured in her later years. Rada developed a love and talent for painting. She shared this passion with her children and grandchildren as well as school and church groups. Her home is filled with her paintings. Rada held many various church callings but her favorite callings involved the Primary Children. She was most comfortable teaching children to love and sing to Heavenly Father. Rada and Wallace served three missions; Scotland, Salt Lake Temple Square, and the Provo Utah Mission office. She also enjoyed serving 12 years as a Temple worker in the Provo Temple. Rada was an exceptional elementary school teacher and was voted “most outstanding teacher” by her peers. Her students loved her and she was the most requested teacher at Rolland Story Elementary School in Story City, Iowa. Of all of her accomplishments, Rada was most proud of her six children. She was a devoted wife and mother. She taught her children to love the Lord and to always serve others. Rada was the most patient individual and always looked on the bright side of any situation. She was always ready and willing to serve at a moments notice. Funeral services will be held at 11:00 am Thursday, March 15, 2018 at Edgemont South Stake Center; 2950 N 350 E Provo, UT. There will be a viewing held from 9:30 – 10:45 a.m. prior to services. Interment will be in Eastlawn Memorial Hills. Condolences may be sent to www.bergmortuary.com.

Our Loving mother, Rada Bronson Hutchison, passed away peacefully at home surrounded by her family, March 9, 2018 at the age of 86. She is survived by her loving husband of 68 years, Wallace Winchester Hutchison, her six children: Linda Stripling,... View Obituary & Service Information

The family of Rada Bronson Hutchison created this Life Tributes page to make it easy to share your memories.

Send flowers to the Hutchison family.