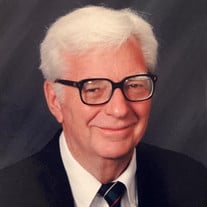 Anyone who knew him will not be surprised, Ralph LaMar Duke wrote his own obituary nearly 20 years ago. Here it is, as written, with minor updates regarding family: Ralph LaMar Duke left this mortal existence on 2-2-22. He was born October 13, 1926 in Provo, Utah to Ralph and Frances Nielsen Duke. In 1931, the family moved to Salt Lake City. They moved to Logan in 1938. Four years later they returned to Provo. LaMar worked on construction of the Geneva Steel Mill. A job in production was interrupted by a greeting from the President. Upon discharge from the Army, he resumed work in the Open-Hearth Department. He retired after 42 years of turning a lot of nights into days while turning a lot of iron into steel. His retirement years were filled with scouting, church, and most of all — family. On June 6, 1952, he married Elaine Whitney in Parowan, Utah. (later solemnized in the Salt Lake Temple). He forever referred to her as his “child bride”. They were blessed with two devoted children: David Whitney and Rebecca Ann. Survived by his wife, Elaine and his children, David and Becky and her spouse, Garth Badura. His grandchildren, Jordan Duke, Victoria Avery (spouse: Sean), Natasha Hall (spouse: Trevor), Dominique Badura, Casey Duke, and Corby Earl. Five great grandchildren, Austin and Drake Earl, Holden Boley, Isaiah Hall, and Zella Avery. Preceded in death by his brothers, Walter, Robert, and Donald Duke (spouse: Betty), and his sister Marilyn (spouse: Keith Williamson). Funeral services will be held at 11:00 a.m., Monday, February 7, 2022 at the Berg Drawing Room Chapel, 185 East Center Street, Provo, Utah. Friends may visit with the family at the mortuary on Sunday, February 6, from 6-8:00 p.m. and Monday from 9:30-10:45 prior to services. Interment will be in the Provo City Cemetery. Condolences may be expressed to the family at www.bergmortuary.com. If you can't attend in-person, here is a link to attend virtually: https://us02web.zoom.us/j/89048300459?pwd=NnNDQ1p0YjlmNlpOMGRMNDR6cW90dz09 If you experience problems with the link, we will upload the video after all services are completed. You will find it here with his obituary.

Anyone who knew him will not be surprised, Ralph LaMar Duke wrote his own obituary nearly 20 years ago. Here it is, as written, with minor updates regarding family: Ralph LaMar Duke left this mortal existence on 2-2-22. He was born October... View Obituary & Service Information

The family of Ralph LaMar Duke created this Life Tributes page to make it easy to share your memories.

Anyone who knew him will not be surprised, Ralph LaMar Duke wrote...

Send flowers to the Duke family.