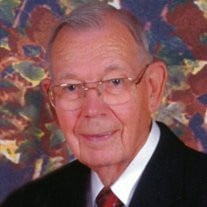 Our beloved husband, father, grandfather, great-grandfather and friend, Ralph Henry Walters, passed away peacefully at home surrounded by his loved ones on 19 Aug 2013 after a brave battle with cancer. Ralph was born 4 Sept 1925 in Price, Utah, to Raymond Frank and Ramona Christensen Walters. Ralph enlisted at 17 in the Army Air Force during WWII as an Aviation Cadet and awaited his call to serve when he turned 18; he decided he did not want to be a foot soldier! When he returned, he married his sweetheart, Geraldine Litster, in the Manti LDS Temple on 11 July 1947. He started his career with Mountain Bell Telephone Company in Price as a janitor while going to high school. That career spanned 43 years. Ralph was known for his “trouble shooting” skills that were mostly self-taught. These enabled him to handle the problems that came before him in Utah, Colorado, and Arizona. He received an Associate degree from Carbon College in Price. He always wanted to get his Bachelor’s degree in Business Administration, which he eventually did in 1979 from Regis College in Denver. Following his retirement from the Telephone Company in 1985, he settled in Provo, UT. Ralph was always willing to serve others. He loved his family, making sure he was a good father and provider, but also made time for fun vacations. Ralph had a special relationship with his grandchildren and great-grandchildren. He handed out good advice with love and humor. In his church he served in many positions including Elder’s Quorum President, a Seventy, High Counselor, Scout Master, counselor in a Branch Presidency, Ward Financial Clerk for 23 years, temple ordinance worker, and served three missions with his wife. One of his favorite callings was working with scouts and helping many attain their Eagle. Ralph was active in various civic clubs, United Way, and Sons of the Utah Pioneers serving as local President and National Vice President. After moving back to Provo he served on the Grandview Farm Condo Board. One of the things he enjoyed very much was helping his friends and neighbors. All it took was a phone call for your computer, phone, or TV to be fixed by Ralph. His pay may have been a smile, handshake, or a box of See’s chocolates. Anyone who knew him knew his passion was being on a stream with a fly rod in his hand. However, he made a deal with his wife; he did not like to attend plays but he would go with her if she would drive him to his favorite fishing spots. When not fishing he took her on exotic trips all over the world. Survived by his wife and six children: Maxine (Jasper) Morris, Cathy (Steve) Hill, Helen (Greg) Melchin, Nancy Walters, Colleen (Paul) Jones and Ken (Michelle) Walters, and by 22 grandchildren and 31 great-grandchildren. Preceded in death by his parents, his sister Norma (Wayne) Close and his brother Ray (Viola) Walters. His family would like to give a special thanks to all the doctors, nurses and staff over the years who have served him with tender loving care. They loved him dearly. Funeral services will be held at 11:00 a.m., Monday, August 26, 2013 at the Grandview 9th Ward Chapel, 1555 North 1350 West, Provo, Utah. Friends may call at the Berg Mortuary of Provo, 185 East Center Street, Sunday from 6-8 p.m. and at the church Monday from 9:30-10:30 a. m. prior to services. Interment at Provo City Cemetery will include military honors. Condolences may be sent through his obituary at www.bergmortuary.com.

Our beloved husband, father, grandfather, great-grandfather and friend, Ralph Henry Walters, passed away peacefully at home surrounded by his loved ones on 19 Aug 2013 after a brave battle with cancer. Ralph was born 4 Sept 1925 in Price, Utah,... View Obituary & Service Information

The family of Ralph Henry Walters created this Life Tributes page to make it easy to share your memories.

Send flowers to the Walters family.