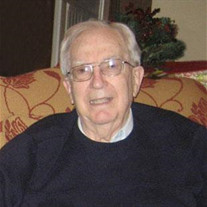 Ray Warren Alvord, loving husband, father, father-in law, grandpa, son, and friend, passed away at home December 17, 2017, with his loving wife and family by his side. Ray was born in North Ogden, Utah, September 13, 1924 to George I. Alvord and Sarah Luella Campbell Alvord. He was the youngest of five boys. His brothers, Lloyd, Vern, Carl, Paul, and their spouses are all deceased. Ray married Bonnie Lou Irwin in San Bernardino, California, August 28, 1949, and this began their 68 years together. Ray was once described as a "Man of Many Careers". From a humble beginning on a North Ogden dairy farm, he became a military leader, PhD research Psychologist, writer, dean of a graduate management program, university administrator, professor, international advisor and business executive. Ray served as a USAF officer from 1950 to 1972, in the US and abroad, retiring as a Colonel. During those years he served in many capacities in England, Japan, and various cities throughout the US. During those years he received a Master's Degree, and then later, a PhD in Psychological Studies from Stanford University. There were many other intermingled life experiences and community service opportunities that Ray enjoyed. These included service with Utah State Office of Child Care, Provo Senior Citizen's Center, and Provo's Cable Board. Ray was a dedicated member of The Church of Jesus Christ of Latter-day Saints, and has served in many leadership and teaching positions. Ray loved his wife, children, and grandchildren and left them with many wise and humorous "nuggets" of wisdom that they fondly repeat often. Ray is survived by his beloved spouse, Bonnie Lou, and three of their four children: Christy Rae Harper (Randy) of St. George, Utah; Kirk Warren Alvord (Jennifer) of Alpine, Utah; and Alyson Plowman (Jeff) of Dallas, Texas; as well as 14 grandchildren and 19 great-grandchildren. Ray will be met on the other side by his eldest son, Gregg Irwin Alvord (Bonnie Merrill), who preceded him in death 29 years ago from an automobile accident. Funeral services will be held at 11:00 a.m., Wednesday, December 27, 2017 in the Pleasant View 4th Ward Chapel, 350 East 2950 North, Provo, Utah. A viewing will be held at the church from 9:30-10:45 a.m. prior to services. Interment will be in the Ben Lomond Cemetery, North Ogden, Utah at 3:30 p.m. the same day. Condolences may be expressed at www.bergmortuary.com.

Ray Warren Alvord, loving husband, father, father-in law, grandpa, son, and friend, passed away at home December 17, 2017, with his loving wife and family by his side. Ray was born in North Ogden, Utah, September 13, 1924 to George I. Alvord... View Obituary & Service Information

The family of Ray Warren Alvord created this Life Tributes page to make it easy to share your memories.

Send flowers to the Alvord family.