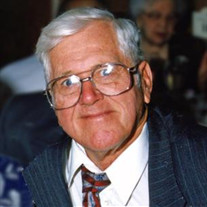 On Thursday May 16, 2019, Ray Leland Carter, father of two and one of only a handful of the remaining Carters−for which the Carterville area and Carterville Road were named−passed away at the age of 88. Ray was born on Monday, June 30, 1930 in what was then known as the Provo Bench, and later became the town of Orem, Utah. Ray enjoyed the outdoors and travel, but his passion was fishing−and he did so well into his eighties. He worked for many years and retired from Mountain Fuel Supply (now Dominion Energy). He was a veteran of the Korean War and believed “once a Marine, always a Marine.” Ray had two children, Kevin and D'Ann, and raised several step children. He was preceded in death by his father, Leland (Lee); mother, Blanch; wife, Thelma; grandson, Devin, and daughter-in-law, Lesli. He is survived by his two children, his brother, Riley, two sisters, Alice and Norma, and many grandchildren and great-grandchildren. Memorial services will be held at 3:00 p.m., Tuesday, May 21, 2019 at the Berg Drawing Room Chapel, 185 East Center Street, Provo, Utah. Friends may call from 2-3:00 p.m. prior to services to share memories and celebrate his life. Condolences may be expressed at www.bergmortuary.com.

On Thursday May 16, 2019, Ray Leland Carter, father of two and one of only a handful of the remaining Carters&#8722;for which the Carterville area and Carterville Road were named&#8722;passed away at the age of 88. Ray was born on Monday, June... View Obituary & Service Information

The family of Ray Leland Carter created this Life Tributes page to make it easy to share your memories.