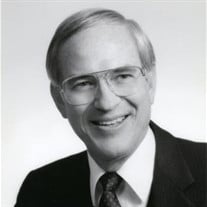 Raymond E. Beckham, one of Provo's well known community and church leaders, and a BYU administrator and faculty member for 42 years, passed away of "TMB" (too many birthdays) on October 31, 2017. He was born February 18, 1927, in Chandler,... View Obituary & Service Information

The family of Raymond Earle Beckham created this Life Tributes page to make it easy to share your memories.

Send flowers to the Beckham family.