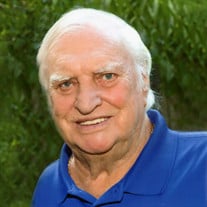 Raymond E. Leavitt of Las Vegas, Nevada, completed his mission here on earth after 80 years on January 4, 2019, surrounded by his family. Ray was born May 16, 1938 in Fernie, British Colombia, Canada. He was born to Edna Holman and Arthur Raymond Smith. At a very young age his parents divorced and Ray remained with his mother. When he was 6 years old his mother married Stanley A. Leavitt. Stan adopted Ray and they were sealed in the Cardston Temple of The Church of Jesus Christ of Latter-day Saints, of which he was a member. They lived in Canada for several years. He attended schools in Canada until age 14 when they moved to Provo, Utah. He was the oldest of 7 children, 1 brother and 5 sisters. He married Doris Elliott and had 3 children. They took their family to Las Vegas, and added another child to their family. They divorced after 27 years of marriage. He remained in Las Vegas. Ray then married Laura L. Anderson in Hawaii and they continued to reside in Las Vegas for 25 years until his death. He was a car enthusiast and owned an auto body shop. He was a member of several organizations with Laura including: United Transportation Union; National Association of Retired and Veteran Railroad Employees; Retired Public Employees of Nevada; American Federation of State, County and Municipal Employees; Nevada Alliance of Retired Americans; Mustang Club; Cadillac Club; and Nevada State Democratic Party Central Committee. Ray worked for the Union Pacific Railroad for 25 years, retiring in the year 2000. He loved being a Grandfather. A highlight for him was teaching the little ones to walk. He could fix almost anything. He also enjoyed traveling. He was preceded in death by his parents, brother Larry, and grandsons Gregory and Shaun. He is survived by his wife Laura; 4 children, Joe Raymond Leavitt, Sharon Leavitt, Susan Leavitt, and Shauna (Greg) Cox; 16 grandchildren, 23 great-grandchildren and 5 sisters. He was loved and will be missed by all. Funeral services will be held at 11:00 a.m., Wednesday, January 16, 2019 at the American Fork 14th Ward Chapel, 1100 East (North County Blvd.) 400 North, American Fork, Utah. Friends may call Tuesday, January 15, at the Berg Mortuary of Orem, 500 North State Street, from 6-8:00 p.m. and at the church Wednesday from 9:30-10:30 a.m. prior to services. A Celebration of Life will be held in Las Vegas, Nevada at a later date. Condolences may be expressed at www.bergmortuary.com.

Raymond E. Leavitt of Las Vegas, Nevada, completed his mission here on earth after 80 years on January 4, 2019, surrounded by his family. Ray was born May 16, 1938 in Fernie, British Colombia, Canada. He was born to Edna Holman and Arthur... View Obituary & Service Information

The family of Raymond E. Leavitt created this Life Tributes page to make it easy to share your memories.

Send flowers to the Leavitt family.