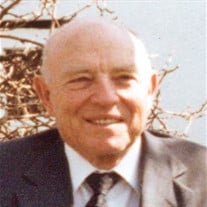 Read LaMont Black passed away Sunday, August 17, 2014. He was born May 12, 1918, in Nephi, Utah to Harrison Eugene and Elizabeth Anne Read Black. He was the oldest of four children growing up during the depression. From an early age he had an aptitude for science and mathematics. Encouraged by family and teachers he worked his way through Civil Engineering and Army ROTC at Utah State University. There he met Helen Carlisle whom he married in the Salt Lake Temple April 8, 1940. Upon graduation, Read was hired by the Bureau of Reclamation and moved to Paonia, Colorado to work on the upper Colorado River Basin Storage Projects. When World War II broke out Read joined the US Army. With his engineering background he became an artillery officer and served in the European Theater participating in most of the major actions in France and Belgium. When the war ended, Read and Helen settled in Grand Junction, Colorado where he continued working on many reclamation projects in western Colorado. He also served in the stake presidency of the Grand Junction Stake. There they raised a family of five sons and two daughters. Camping and fishing on the Grand Mesa and deer hunting on Pinion Mesa were favorite family activities. In 1966 Read transferred to Provo, Utah to work on the Central Utah reclamation projects and as a technical consultant in the Philippines. Retiring after a long and successful engineering career, Read and Helen served senior couple missions to the island of Antigua and to London England. Later they served as ordinance workers in the Provo Temple. Both were active in the Kiwanis Club. Helen passed away in 2010 leaving a lonely, nearly blind, but very independent husband. Read was blessed with caring neighbors and ward members for whom the family will be eternally grateful. Read is survived by his children Stephen (Linda) Black, Marjorie (Gerald) Hill, Richard (Carol) Black, Harold (Jolynne) Black, Terri (Mark deceased) Jarvis, and Carl (Nan) Black, brother Keith (Marilan) Black, sister Rhea Morgan, thirty four grandchildren and eighty eight great-grandchildren. He was preceded in death by his wife, son Donald Black, son-in-law Mark Jarvis, and brother Neil (Joan) Black. Funeral services will be held at 2:00 p.m., Friday, August 22, 2014, at the Berg Drawing Room Chapel, 185 East Center Street, Provo, Utah. A viewing will be held one hour prior to services. Interment will be in the Orem City Cemetery. In lieu of flowers, donations can be made to the LDS General Missionary Fund. Condolences may be sent online at www.bergmortuary.com.

Read LaMont Black passed away Sunday, August 17, 2014. He was born May 12, 1918, in Nephi, Utah to Harrison Eugene and Elizabeth Anne Read Black. He was the oldest of four children growing up during the depression. From an early age he had an... View Obituary & Service Information

The family of Read LaMont Black created this Life Tributes page to make it easy to share your memories.