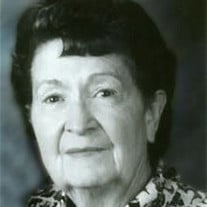 Honored and beloved, Reah Bloomfield Pehrson, age 95, died July 8, 2016, in Provo, Utah. Reah was born May 29, 1921 in Kirtland, New Mexico, a daughter of Alexander F. and Nina M. Bond Bloomfield. She married Alfred Dale Pehrson September 3, 1941 in Farmington, New Mexico. The marriage was later solemnized in the Ogden, Utah, LDS Temple. Reah attended school in Kirtland, New Mexico. She also lived in Monticello and Provo, Utah. She loved to learn and developed many talents. She enjoyed cooking, rock collecting, cake decorating, gardening, flower arranging, sewing, crocheting, tatting, machine embroidery, records extraction, genealogy, and attending the temple. She was interested in good nutrition and exercise, even in her later years. She was a dedicated visiting teacher, compassionate service leader, and ward librarian. She was a wonderful, cherished mother, grandmother, and great grandmother. She will truly be missed. Reah is survived by her daughter, Patricia (Boyd) Worthington of Orem; son, Curtis Pehrson of Provo; four grandchildren; 16 great-grandchildren; one great-great-grandchild; and brother, Jay Bloomfield of Kirtland, New Mexico. She was preceded in death by her husband, Dale; parents; six brothers: Owen, George, Melvin, Don, Glen, and Arlin; and sister, Mae. A special thanks goes to IHC Hospice nurses and aids for the care they gave for many months. Funeral services will be held at 11:00 a.m., Wednesday, July 13, 2016 at the Berg Drawing Room Chapel, 185 East Center Street, Provo, Utah. A viewing will be held at the mortuary from 10:00-10:45 a.m. prior to services. Interment will be at the Provo City Cemetery. Condolences may be expressed at www.bergmortuary.com. In lieu of flowers, please contribute to the LDS Humanitarian Fund.

The family of Reah Bloomfield Pehrson created this Life Tributes page to make it easy to share your memories.

Send flowers to the Pehrson family.