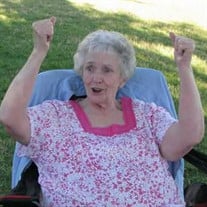 Free At Last! Rebecca Ann Dove (Becky), 85, of Ogden Utah, passed away on January 3, 2017, after a long struggle with Alzheimer’s. Her spirit is now free from the shackles of this debilitating disease. Becky was born in Tooele, Utah on August 5, 1931, to Clara Thompson who later married Dorman Parris. She attended Provo schools and graduated from Provo High School. She was married to Kenneth L. Dove; they later divorced. Becky worked as a secretary for Geneva Steel and for Grow Finance Company in Provo. Later, she would work with her husband as bookkeeper in their grocery business. She enjoyed traveling, camping, boating, cooking, and spending time with family. She was an active member of The Church of Jesus Christ of Latter-day Saints. She held multiple church callings. Her favorites were primary teacher and compassionate service leader. She was active in the Ephraim community. Becky’s greatest love was her family. She loved spending time with them. She especially loved to cook. She compiled her recipes in a book which the family cherishes. She experienced the depression as a young child. She often talked about eating dandelion sandwiches. Even with all the difficulties and challenges she experienced, Becky was always optimistic. She was always encouraging her children and grandchildren with positive communication. She wanted nothing more than for her children and grandchildren to love each other. Becky is survived by her 5 children: Rick Dove (Mary) of North Ogden, Sherry Dove of Magna, Kristi Hansen (Scott) of Ephraim, Kimm Harman (Lenny) of Saratoga Springs, and Dave Dove (Dawna) of Provo; foster son, Juan Martinez of Texas; 24 grandchildren, 40 great-grandchildren, 2 great-great-grandchildren; and brother, Tom Parris. Becky was preceded in death by Kenneth Dove; brother, Roy Parris; and grandchild, Brian Campbell. Funeral services will be held at 11:00 a.m., Monday, January 9, 2017 at the Jacobs Ranch 1st Ward Chapel, 163 West Ring Road, Saratoga Springs, Utah. Friends may call at the Berg Mortuary of Provo, 185 East Center Street, Sunday, January 8, from 6-8:00 p.m. and at the church Monday from 10-10:45 a.m. prior to services. Interment will be in the Orem City Cemetery. Condolences may be expressed at www.bergmortuary.com.

Free At Last! Rebecca Ann Dove (Becky), 85, of Ogden Utah, passed away on January 3, 2017, after a long struggle with Alzheimer&#8217;s. Her spirit is now free from the shackles of this debilitating disease. Becky was born in Tooele, Utah... View Obituary & Service Information

The family of Rebecca (Becky) Ann Dove created this Life Tributes page to make it easy to share your memories.

Send flowers to the Dove family.