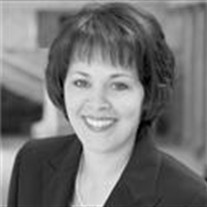 Rebecca Dawn Tower Lockhart, first female Speaker of the Utah House of Representatives, passed away at the age of 46 surrounded by family on January 17, 2015. Becky's life was taken by sporadic Creutzfeldt-Jakob disease (CJD). She was born in Reno, Nevada on November 20, 1968 to Jerald and Gretchen Tower. She grew up in Arizona, New Mexico, and Idaho. She graduated from Highland High School in Pocatello, Idaho. Becky was on the dance team and involved in student government. She graduated from Brigham Young University with a degree in nursing, and always called Utah home. She married Stan Lockhart on April 29, 1988 in the Salt Lake LDS Temple. Becky worked as a nurse for 7 years before she was elected to the Utah House of Representatives in 1998, serving the people in District 64. Over the next 16 years, she served in a number of political leadership roles, and became known for her inclusiveness, humor and love of 80s rock music. In 2010, she was elected Speaker of the House by her legislative peers. Becky served as Speaker until the end of her term on December 31, 2014. In support of her family and in her responsibilities to the State of Utah, Becky traveled all over the U.S., Italy, Taiwan, China, Singapore, Mexico, South Korea, Scotland, and Puerto Rico. Becky enjoyed spending time with her family, especially at the family cabin in Idaho. She loved going to the movies and was an avid reader. Her favorite pastime was quilting. Becky served faithfully in numerous positions within the LDS church. At the time of her death, she taught Gospel Doctrine and was Girls Camp Director. Becky is survived by her husband, Stan, and three children, Hannah, Emily (Max) Britton, and Stephen. Additional survivors include her parents, two sisters, Carrie (Jay) Castillo and Lara (Aaron) Millington, and two brothers, Matt (Brittany) and Sam (Kimber) Tower. A public memorial service in the Utah State Capitol Rotunda will be held on Thursday, January 22 at 10:00 a.m. That evening from 6:30 p.m. to 8:30 p.m. the family will be receiving condolences at the LDS Stake Center located at 1629 South Slate Canyon Drive Provo, Utah. Funeral services will be held on Friday, January 23 at 11:00 a.m. at the LDS Stake Center located at 352 North 900 East in Provo, Utah.

Rebecca Dawn Tower Lockhart, first female Speaker of the Utah House of Representatives, passed away at the age of 46 surrounded by family on January 17, 2015. Becky's life was taken by sporadic Creutzfeldt-Jakob disease (CJD). She was born... View Obituary & Service Information

The family of Rebecca Dawn Tower Lockhart created this Life Tributes page to make it easy to share your memories.

Send flowers to the Lockhart family.