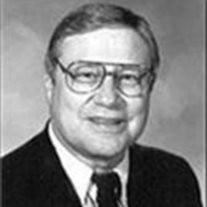 Reed Harris Blake, PhD, died at age 81 from complications of metastatic prostate cancer on February 13, 2014 in Provo, Utah. An author and educator, he was born January 31, 1933 to Reed Eldon and Ethyl Andrea Harris Blake in St. George, Utah. He was preceded in death by his wife Katie Dean Blake, son Steven Eugene Blake, and sister Irene (Clyde) Beardall. He grew up in St. George and was graduated from Dixie High School in 1951, lettering in baseball, track and field, and basketball, and was graduated in 1953 from Dixie College, where he was also a letterman. He served in the military from 1953-1955, stationed in Bussac, France. He was editor of the battalion newspaper and a technical writer in the 82nd Engineering Battalion. Following his military service, he went to Brigham Young University, earning a BS in journalism in 1957 and a MS in communications and sociology in 1959. At BYU he was president of the Associated Men Students, a member of the ASBYU cabinet and ASBYU Senate. He was also president of the Val Hyric Social Unit. He married Katie Dean Hall of Salt Lake City on September 8, 1959 in the Salt Lake Temple. Following their marriage, they went to St. George where he had an appointment as a director of public relations and instructor in journalism. Two years later they moved to Salt Lake City, where he was an associate editor of The Improvement Era magazine. In 1963 he left The Improvement Era to establish the first department of journalism at Weber State University. Two years later he went to Utah State University to teach journalism and sociology and to work on his doctorate, which was awarded in 1969. In 1967 he accepted a position at Brigham Young University in the department of sociology. He retired from BYU in 1998 after 30 years of teaching and research. During his career at BYU he was invited to help establish the School of Social Work and upon his retirement he was a professor of sociology and social work. He authored or co-authored 16 books. Among his titles are Concepts in Communications, Technical Writing for Social Scientists, The Intermountain West, The Carthage Tragedy, Disaster Preparedness, and A Piute Wind. He was published in many professional journals and several popular magazines. For nearly two decades of work in disaster research he was given citations by the Schwartenburg School of Civil Defense (Switzerland) and the Fire Service College (England). In ceremonies in Bonn, the German government awarded him a medal for his disaster research. The National Parks Service also presented him with a medal for his work in arch measurement. He established that Kolob Arch in Zion National Park is the largest natural span in the world. At BYU he was given the university's Phi Kappa Phi Professor of the Year award, The School of Social Work's professional educator award and the exemplary service award. For nearly a decade he was chairman of the University Athletic Board, and served a term on the Faculty Advisory Council. He was president of the Western Social Science Association, the nations largest social science society, and in 2002 he was named an Academy Fellow by the Utah Academy of Sciences, Arts and Letters. Always active in The Church of Jesus Christ of Latter-day Saints, he served as a bishop, a member of a stake presidency, a high councilor, and a branch president among other positions. Following his retirement from BYU, and that of his wife Katie Dean from Provo School District, together they served a 20-month mission for the Church. He was a great lover of the outdoors and of western history. He and members of his family traced all of the major and most of the minor pioneer trails in the west. He played a leading role in establishing the sociology of the intermountain west as a field of study. He is survived by his three sons, Reed Murray (Gerilee), and Spencer Hall, both of Provo, and Jaren Hall (Mary), Sparks, Nevada; two daughters Kristin Dean (Chris) Cooper, Provo, and Laura Kathleen (Jason) Roberts, Stafford, Virginia; two sisters Kathleen (Robert) Mitchell, Grass Valley, California, and Karen (John) Frei, Springville, and 15 grandchildren. Funeral services will be held at 11am, Tuesday, February 18, 2014 at the Edgemont South Stake Center, 2950 N Canyon Road, Provo, Utah. Friends may call at the Berg Mortuary of Provo, 185 East Center Street, Monday evening from 6-8pm and at the church Tuesday from 9:45-10:45 am. Interment, East Lawn Memorial Hills, Provo, Utah. Condolences may be sent online at www.bergmortuary.com.

The family of Reed Harris Blake created this Life Tributes page to make it easy to share your memories.

Reed Harris Blake, PhD, died at age 81 from complications of...

Send flowers to the Blake family.