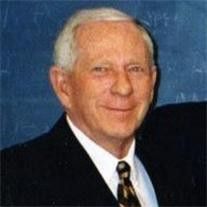 Our beloved Reed R. Boshard, 1933-2010, dedicated husband, father, grandfather, great-grandfather and friend, passed away peacefully September 28, 2010, surrounded by his family at his home in Provo, Utah. Born August 3, 1933 to Reed R. and Zelma Boshard, Reed attended schools in the Provo School District where he excelled in sports at Provo High and worked in student government. He later attended Brigham Young University on an athletic scholarship where he lettered on the BYU golf team. Reed was part of the Utah All-State 4 man junior golf team of 1950 and represented Utah in the National Junior Amateur Championship. He was also a part of many state championship fast-pitch softball teams throughout his life. On May 28, 1954, he married the love of his life, Connie Boyden in the Salt Lake Temple. Together, they had four sons. In 1962, Reed accepted a job at BYU where he worked for 34 years and retired as a mechanical/electrical construction coordinator. He was active in the LDS Church and served in many capacities including elders quorum president, financial clerk, bishop, high council, MTC branch president and temple ordinance worker. In 1996, Reed and Connie accepted a call to serve as missionaries in the West Indies, Trinidad Mission where Reed served as a counselor in the mission presidency. Reed was known for his incredible honesty, integrity, hard work, organization, and most of all, genuine love for his fellow man. He is survived by his wife Connie, sons, Rand Boshard (Dana); Rusty Boshard (Becky); Rob Boshard (Roxanne); Ron Boshard (Jennifer); 22 grandchildren, and 4 great-grandchildren. A special thanks to Carol, Kristi, Kraig and Nancy and to Sunbrook Hospice's Rebecca and Suzanne. Funeral services will be held at 11:00 a.m., Monday, October 4, 2001 at the Edgemont 9th Ward Chapel, 4300 N. Canyon Road, Provo. Friends may call at the Berg Mortuary of Provo, 185 E. Center Street, Sunday evening from 6 until 8 p.m. and at the church Monday from 9:30-10:45 a.m. prior to services. Interment, Provo City Cemetery. Condolences may be sent through www.bergmortuary.com or [email protected]

The family of Reed Boshard created this Life Tributes page to make it easy to share your memories.

Send flowers to the Boshard family.