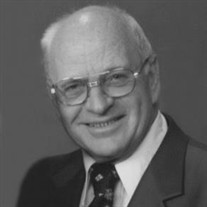 Reid Howard Garlick, age 97, passed away April 1, 2019. He was born on November 4, 1921 to William Howard Garlick, Jr. and Pernella (Nellie) Christena Nielson in Fairview, Utah. Reid married Beth Wilkinson on January 23, 1945 in the Salt Lake City Temple for Time and All Eternity. They were married 69 years. Reid always said that Beth was the love of his life. Reid was a hard-working husband and father for his 6 children: Dale E. (Betty) Garlick, Mona, Utah; Jay W. (Mija) Garlick, Alpine, Utah; Joe H. (Darlene) Garlick, Pleasant Grove, Utah; Sherry (Dave) Farnsworth, Adamsville, Utah; Kathryn (Rod) Clements, Lehi, Utah; and Donald R. (Karen) Garlick, Fairview, Utah. Reid grew up on a dairy farm. He loved horses from his youth. He played the trombone in the Springville High School Marching Band, which took All-State and went to the National Final Competition in Kansas. He also played in a dance band during High School. After Graduation he joined the Army Air Corp. He served as a Sargent over the mechanic crew on the P – 38’s during World War II. He had a dairy farm for several years. He worked at Dugway Proving Grounds for several years. He retired from BYU where he worked in the heating plant. He liked to work on car engines and rebuild old tractors from scratch. He was an avid gardener. He had a natural green thumb. He loved growing vegetables, raspberries, and many beautiful flowers, especially roses. While living in Orem, his yard won the Beautification Award from Orem City. He had many callings in The Church of Jesus Christ of Latter-day Saints. But his favorite was being a Temple worker in the Mount Timpanogos Temple. Reid passed away at Abbington Manor in Lehi, Utah. He was preceded in death by his dear wife, Beth, 1 Brother, 2 sisters, and 3 grandchildren. His posterity includes 52 grandchildren, 140 plus great-grandchildren, and 25 great-great-grandchildren. He will be missed by all. He is now with the love of his life, Beth. Funeral services will be held on Friday, April 5, 2019 at 11:00 am. A viewing will be held from 9:30 to 10:45 am before the funeral. The funeral will be held at the American Fork 6th Ward Chapel, 300 North 100 East, American Fork, Utah. Internment, Timpanogos Memorial Gardens, 1000 North 400 East Orem, Utah. Condolences may be sent online at www.bergmortuary.com. The family would like to thank the Abbington Manor Assisted Living CNA’s, nurses and staff for their tender care and many kindnesses during his time there.

The family of Reid Howard Garlick created this Life Tributes page to make it easy to share your memories.

Send flowers to the Garlick family.