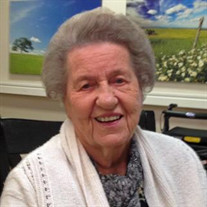 Our beloved mother, Renate Hildegard Bundy, passed away February 21, 2020. Renate was born March 9, 1930 in Breslau, Silesia, Germany to Gertrude Kamalla and Max Schöeps. She grew up during WWII and suffered many hardships during that time. Maybe that is why she became a very strong-willed and independent person. She was a world-class chef, baker, seamstress, gardener, writer, and story-teller. She enjoyed sharing her talents with others, especially cooking wonderful dinners. Renate married Ned Orville Bundy in 1954. Ned served in the United States Army so the pair enjoyed living in many places. They had 4 children and settled in Utah; they lived in Murray and then Springville for many years. Ned passed away in August, 2005 and Renate missed him dearly. Renate is survived by her son, Darwin (Lise) Bundy; two daughters, Mimi (Kim) Webb and Patricia (Ed) James; 7 grandchildren, 11 great-grandchildren, and relatives in Germany. She was preceded in death by her husband, Ned, oldest son, Leroy Bundy, and step-grandson, Marcus James. The family is thankful for the wonderful staff at the Mervyn Bennion Central Veterans Home in Payson for their support and loving care of Renate. We also want to thank Carrie and the staff at Beehive Assisted Living in American Fork. Memorial services will be held at 11:00 a.m., Monday, March 2, 2020 at the Berg Drawing Room Chapel, 185 East Center Street, Provo, Utah. Friends may visit with the family from 10:30-11:00 a.m. prior to services. A graveside prayer and interment will follow at the Utah Veterans Memorial Park Cemetery where Renate and Ned will rest in peace together. Condolences may be expressed at www.bergmortuary.com.

Our beloved mother, Renate Hildegard Bundy, passed away February 21, 2020. Renate was born March 9, 1930 in Breslau, Silesia, Germany to Gertrude Kamalla and Max Schöeps. She grew up during WWII and suffered many hardships during that time.... View Obituary & Service Information

The family of Renate Hildegard Bundy created this Life Tributes page to make it easy to share your memories.

Send flowers to the Bundy family.