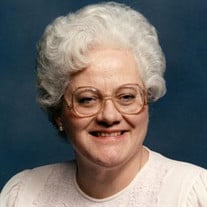 Reva Bee Baxter Pope, 81, passed away Saturday, January 2, 2016 at the Utah Valley Specialty Hospital in Provo, Utah after an extended illness. She was born October 23, 1934 in Provo, Utah to James Loyd and Berniece Knudsen Baxter, the eldest sister of LaRee, Fern and Leonard. Reva grew up in Provo on the family dairy farm, saying it was “hard” but with lots of family memories. Reva attended schools in Provo and graduated from Provo High School, where she met her life-long sweetheart Charles Ernest Pope. They were married in the Manti LDS Temple on May 15, 1953. Reva and Charles are the parents of Rebecca (Don) Larson, Lloyd (Mary), John (Cheri), LynnAnn (Randy) Gonzales, Karl (Nancy), Valinda (Dan) Johnston, Janice (Jason) Sucher, Rachael (Chad) Kay, and Alisa (Jayson) Yochim. They have 38 grandchildren and 36 great-grandchildren. Reva has been active in her church and community. She filled callings in the LDS Primary, Relief Society, and Young Women organizations. She and Charles served missions to the Conference Center and the Palmyra New York Mission. Reva also was active in the DUP and other civic and social clubs. She was a true, blue season ticket BYU Cougar fan. In addition to her family, Reva loved her plants. She had wonderful flower beds and every window of her house was filled with green growing plants. She also loved music and singing. She and Charles always sang in the ward choir. One of our last memories will be of Mom and Dad singing Christmas carols in the hospital on Christmas Eve. Reva was preceded in death by her parents; brother-in-law, Larry Hawkins and son-in-law, Scott Robbins. She is survived, and dearly loved and missed, by her husband Charles, her children, grandchildren, and great-grandchildren, sisters, brother and other family members and friends. Funeral services will be held at 11:00 a.m., Saturday, January 9, 2016 at the Grandview 9th Ward Chapel, 1555 North 1350 West, Provo, Utah. Friends may call at the Berg Mortuary of Provo, 185 East Center Street, Friday, January 8 from 6-8:00 p.m. and at the church Saturday from 9:30-10:45 a.m. prior to services. Burial will be in the Provo City Cemetery. Condolences may be extended to the family at www.bergmortuary.com.

The family of Reva Bee Baxter Pope created this Life Tributes page to make it easy to share your memories.