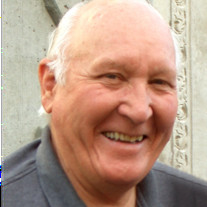 Rex Brailsford, one of God’s gentle angels, returned to his Father in Heaven on March 12, 2014 at 3:36 p.m. He was born on October 28, 1932 in Provo, Utah to John Jr. Brailsford and Laura Maud Hatfield. He was preceded in death by his beloved wife, Norma Leavitt, to whom he was sealed in the Salt Lake Temple. He is survived by his wife, Pauline Larsen, to whom he was married in the Provo Temple in 1999; sister, Ruth Bahr; Children, Kevin (Annette) Brailsford, Cyndra Brailsford, Julida Nelson, and Julian Brailsford; step-children, Kenneth S. (Darlene) Larsen, Kathleen (Lynn) Higham, Alan (Angela) Larsen, Dean (Alyson) Larsen, Korin Larsen, and Tricia (Chad) Richards; 30 grandchildren and 14 great-grandchildren. Thank you to all the angels at Sunrise Home Health and Hospice who have helped Rex throughout his illness. He attended school in Provo, Utah as a youth and later attended Central Utah Vocational School (UVU). He worked as a concrete finisher and construction worker. He served faithfully in his many church callings including a temple ordinance worker in the Provo Temple, a Priesthood meeting Instructor, a Cub Scout leader, and a financial clerk. He served three service missions with his wife, Pauline. Rex served his country during the Korean War in the Navy from May 18, 1951 to May 10, 1955. He always loved to work outdoors with his hands. He enjoyed carpentry, softball, fishing, taking road trips, and loved going to family reunions. His greatest love was his children, grandchildren and great-grandchildren. Funeral services will be held at 11:00 a.m., Monday, March 17, 2014 at the Lakeview 6th Ward Chapel, 2168 South 140 West, Orem, Utah. Friends may call at the Berg Mortuary of Provo, 185 East Center Street, Sunday evening from 6-8:00 p.m. and at the church Monday from 9:30-10:45 a.m. prior to services. Interment will be in the Provo City Cemetery. Memorial Contributions can be given to Primary Children’s Hospital. The obituary can be accessed at www.bergmortuary.com.

The family of Rex Brailsford created this Life Tributes page to make it easy to share your memories.

Rex Brailsford, one of God’s gentle angels, returned to his Father...

Send flowers to the Brailsford family.