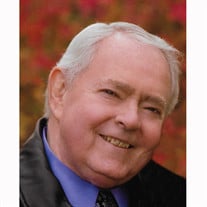 Rex King Griffiths (age 78), loving husband, father and grandfather, returned home to his heavenly parents February 17, 2020. His long, well fought battle with constant pain and aging body finally over. Rex was born on April 14, 1941 to Hugh Darrell and Mary Bernice King Griffiths in Cedar City, UT. From the time he was little, Rex lit up every room he entered. He always had a twinkle in his eye, a story to tell, and was the definition of kind-hearted. Rex served a mission for The Church of Jesus Christ of Latter-day Saints in Japan, as well as his country in the US Army. He married Kathy Jean Grogan in the Salt Lake Temple on May 27, 1965, and they had 7 children before Kathy’s death in 1995. In 1996, he married Jennifer Moses and added her three children to the family. Rex was a devout member of The Church of Jesus Christ of Latter-day Saints his entire life. He loved to serve others and cherished his time working with the youth in the scouting program, as young men’s president, and as Bishop. Rex loved his family, both immediate and extended. Through the years Rex's family stretched to include anyone in need of love and care. If he saw a need, he would do anything in his power to meet it. He loved easily and blessed the lives of everyone he met. Rex was preceded in death by his parents, first wife Kathy, and two children, James Rex and Micheal Edward. He is survived by his wife Jennifer Moses-Griffiths; children, Debbie (Happy) Ditton, Lisa (David) Boyce, Ryan (Kami) Griffiths, Robert (Kathy) Griffiths, Becky (Matt) Gillette, JoyAnne (Constantine) Chelios, Ryan (Malissa) Moses, Tyler Moses; siblings, Roy (Leanna) Griffiths, Brent (Sandi) Griffiths, Mary Ann (Jeff) Liljenquist, Gary (Laura Jo) Griffiths; 30 grandchildren and 4 great grandchildren. Funeral services will be held at noon on Monday, February 24, 2020 at the Edgemont North Stake Center, 345 East 4525 North Provo, UT, and are under direction of Berg Mortuary. A reception will be held from 10:30-11:30AM, prior to the service, for those wishing to express their condolences to the family. Interment, East Lawn Memorial Hills, Provo. Condolences may be expressed at www.bergmortuary.com.

The family of Rex King Griffiths created this Life Tributes page to make it easy to share your memories.

Send flowers to the Griffiths family.