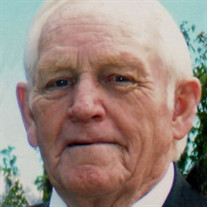 Rex Lynn Jones, our beloved husband, father, grandfather and brother, passed away at Utah Valley Regional Medical Center, on Wednesday, September 3, 2014, after a year-long battle with leukemia. He was a kind and loving man and was truly a great and noble soul. He was born in Springville, Utah, October 27, 1933, the youngest of five children, to George Noble and Lula Mason Jones. He was raised in Springville in a loving and extensive family. He said that they were poor but didn’t know it. In 1950 he met his future wife, Carma D Bott, in Pioneer Park in Provo, Utah. They started dating and were married on March 27, 1954 at the home of Carma’s parents, LeRoy and Mable Bott. They were sealed on April 2, 1970 in the Manti Utah Temple. He served in the U. S. Navy during the Korean conflict and told of missions that he flew over Korea and Southeast Asia. He loved hunting, fishing and camping with his family and friends. He was a member of The Church of Jesus Christ of Latter-day Saints and served in many callings including, scoutmaster, ward clerk, bishop and counselor in a stake presidency. He especially enjoyed his years as the executive secretary to four presidents at the Missionary Training Center. He and Carma later served a two year service mission at the Provo Tabernacle; however his greatest callings were Husband, Father and Grandfather. Rex is survived by his wife, Carma; their son, Dennis Lynn (Suanne) Jones, Mapleton, Utah and their daughter, Carrie Lee (John) Benefiel, Yuma, Arizona. He is also survived by ten grandchildren; 19 great-grandchildren; a brother, John W. “Jack” Jones, Orem, Utah and a sister, Audrey Carter, Layton, Utah. He was preceded in death by a daughter, Helen Dorene Wardle; his parents; a sister, Thelma Carter and a brother, George Teddy “Ted” Jones. Funeral services will be held at 11:00 a.m., Saturday, September 6, 2014 at the Franklin 1st Ward Chapel, 600 West 300 South, Provo, Utah. Friends may call at the Berg Mortuary of Provo, 185 East Center Street, Friday, September 5, from 6-8:00 p.m. and at the church Saturday from 9:30-10:45 a.m. prior to services. Interment will be in the Provo City Cemetery. Condolences may be sent online at www.bergmortuary.com.

Rex Lynn Jones, our beloved husband, father, grandfather and brother, passed away at Utah Valley Regional Medical Center, on Wednesday, September 3, 2014, after a year-long battle with leukemia. He was a kind and loving man and was truly a great... View Obituary & Service Information

The family of Rex Lynn Jones created this Life Tributes page to make it easy to share your memories.