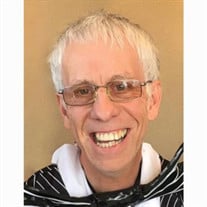 A dear, gentle soul left this earth Saturday, February 12, 2022. Richard Ward Allen passed away just twelve days before his sixty-first birthday. Rick was the youngest child and only son of Helen Ward and Glen Michie Allen. He was born February 25, 1961, on his mother’s birthday. Rick’s childhood was marred with developmental challenges and poor health. His parents were told he would likely not live to adulthood, but Rick beat the odds. As a teen, he attended the resource program at Skyline High School. After his mother died in 1982, Rick and his dad became close companions. Together they fished, repaired cars, and traveled. Rick visited Spain, Germany, Peru, and many states across the USA with his dad. On several occasions, Rick and his dad served as “swampers” on river trips down the Green and Colorado rivers led by Rick’s sister, Mary. After Mary died in 2006, CRATE (Colorado River and Trail Expeditions) continued to invite Rick to join them on a yearly river-running trip. There is a section of the Colorado they called “Rick’s Rapids” in his honor. Another special trip was a 2011 family cruise to Hawaii in celebration of Rick’s fiftieth birthday. After his father’s death in 1999, Rick lived independently in his family home. He loved and cared for three companion dogs he owned in succession. First, Duffy, a wire-haired terrier; second, Duke, a Tibetan Spaniel; and last, Mike, a Cavalier King Charles Spaniel, who is now missing Rick terribly. Rick was a speedy walker, a skill that he put to good use when he worked as the newspaper carrier in his neighborhood from 1993 until he retired in 2017. Neighbors called him “the light of the neighborhood”. He had only one mood — cheery. When asked for his advice, Rick’s response was “Just do what makes you happy”. In summer and fall, Rick and Mike took daily hikes in nearby Millcreek Canyon. Rick looked forward to a weekly breakfast at IHOP with caring friends, Don Drew and Paul Hewitt. These kind gentlemen were also his fishing buddies over the past several years. He was a wonderfully supportive and caring uncle to his nieces and nephews. He rarely missed a birthday celebration. If he couldn’t make it, he called. He attended their weddings and made sure to cut a rug on the dance floor any chance he got. Rick was delightfully supportive of his nieces and nephews’ fiendish antics like water fights and tickle contests, which was a great way for him to keep his sisters on their toes. Rick’s favorite color was purple. Nobody wore purple better than Uncle Rick. He was a devoted fan of the Salt Lake Bees baseball team and attended or listened to their games faithfully. He subscribed to MLB television and loved watching baseball. A yearly highlight in his life was visiting his sister, Anita, and seeing the St. Louis Cardinals play at Busch Stadium. He was an avid collector of model cars. He loved to display them in his home where every available spot featured a favorite model car in addition to many acrylic car cases on his walls. His favorite candy was Junior Mints. He liked to listen to country music singers Willie Nelson and Garth Brooks. He was known to gleefully listen to Native American Indian drum music while driving much to the chagrin of the passengers in his car. He loved watching old John Wayne movies, hence his little dog’s name, Duke. Rick will be missed at family Sunday dinners at his sister, Janet’s home. He always arrived early to help, was a speed eater, and loved desserts except for pumpkin pie. His favorites were ice cream sundaes and anything chocolate. How he remained tall and skinny was a mystery. He could and often did, beat anyone at his favorite game of crazy 8’s. Rick is survived by his sister, Janet (Jeff) Cannon, who has been his caretaker for the last twenty-three years, and his sister, Anita (Robert) Snyder of O’Fallon, Illinois near St. Louis. He was uncle to nieces: Nicole Cannon Nance, Carole Cannon Hansen, Noel Cannon, and Lisa Snyder Frerichs. He was also uncle to nephews: Clark Cannon, Scott Cannon, and Rob Snyder. He was loved by twelve great-nieces and great-nephews as well. A celebration of Rick’s life will be held at 11:00 a.m., Saturday, February 26, 2022, in the Idaho Room of Little America Hotel, 500 S Main St, Salt Lake City, UT 84101. Interment will be near his parents and his sister, Mary in Provo City Cemetery. In lieu of flowers, the family suggests making a donation in Rick’s honor to the Best Friends Animal Sanctuary at https://utah.bestfriends.org. Condolences may be expressed at www.bergmortuary.com.

The family of Richard Ward Allen created this Life Tributes page to make it easy to share your memories.

Send flowers to the Allen family.