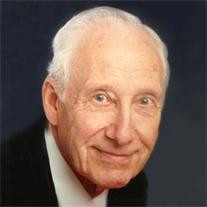 Richard John Bogus, 87, of Provo, passed away at home of natural causes on Monday, February 25, 2013, while holding hands with his lifelong sweetheart. His last words to her were, "Kiss me!" Richard was born on October 8, 1925, in Columbus, Nebraska, to John C. and Elsie Neuhaus Bogus. The family moved to Helper, Utah, where Richard's father worked as a signalman for the railroad. They then moved to Provo, where Richard graduated from Provo High School in 1943. He was working as an ice cream maker at Sun Freeze Ice Cream Co. in Provo when he was inducted into the U.S. Navy. Richard served as an electricians' mate from January 1944 to May 1946, when he was honorably discharged. He received the Asiatic-Pacific Campaign Medal, World War II Victory Medal and Philippine Liberation Medal. After he returned from the war Richard married Elaine Menzies. He began an electrical apprenticeship in Colorado Springs, Colorado, and then transferred to Utah to complete his apprenticeship with the International Brotherhood of Electrical Workers, Local 354. He worked throughout the state as a master electrician, eventually becoming a foreman for Wasatch Electric, on projects ranging from powerhouses and city buildings to schools. He liked working with his hands and the challenge of seeing a project to its completion. He was a good, fair and caring boss and a loyal union supporter. Richard was selected as the training director for the Joint Apprenticeship Training Committee in 1982 and served until his retirement in 1993. In that post, Richard ensured Utah had many highly skilled and qualified electrical craftsmen, and truly cared about their well-being and their futures. He was an honorary member of the National Electrical Contractors Association. He loved to fish and spent many enjoyable and patient hours trolling the waters at Deer Creek, Scofield, Strawberry and Fairview reservoirs. Richard loved sports, especially Notre Dame football, the Chicago Cubs and the Chicago Bears. Richard was a member of St. Francis of Assisi Parish and a Fourth Degree Knight of Columbus. He gave many hours of service and labor to St. Francis church and school. Richard was preceded in death by his parents and his brother Marvin. Richard is survived by his loving wife Elaine, and their six children: Mary Ellen (Dennis) Piper of Los Angeles, Kathleen DiMartino of Salt Lake City, John (Sally) Bogus of Pleasant Grove, Bill (Cris) Bogus of Sandy, Tom (Brooke) Bogus of Salt Lake City, and Janet (Eric) Kuehl of Seattle; 14 grandchildren; eight great-grandchildren; and his sister, Clarice. A funeral mass will be held at 2:00 p.m., Friday, March 1, 2013, at St. Francis of Assisi Catholic Church, 65 East 500 North, Orem, Utah. Friends may call at the Berg Mortuary of Provo, 185 East Center Street, Thursday evening from 6 until 7 followed by a rosary service. Interment, Provo City Cemetery. Condolences may be emailed to [email protected] Richard was a true gentleman, a loving husband, father, grandfather and great-grandfather, and we will miss his clear, smiling blue eyes forever.

Richard John Bogus, 87, of Provo, passed away at home of natural causes on Monday, February 25, 2013, while holding hands with his lifelong sweetheart. His last words to her were, "Kiss me!" Richard was born on October 8, 1925, in Columbus,... View Obituary & Service Information

The family of Richard Bogus created this Life Tributes page to make it easy to share your memories.

Richard John Bogus, 87, of Provo, passed away at home of natural...

Send flowers to the Bogus family.