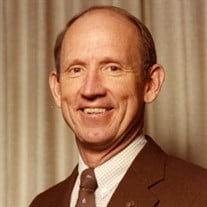 Richard Dean Cox, 81, of Provo, Utah, passed away November 9, 2014, in the Utah Valley Regional Medical Center of complications resulting from a stroke. Richard was born on December 17, 1932 in St. Anthony, Idaho to Golden H. and Lilly Cox. He moved to Idaho Falls, Idaho where he spent his youth and graduated from High School. After attending a year of college at Idaho State University, he transferred to Brigham Young University where he received a Bachelors Degree in Journalism. While at BYU, he entered the Air Force ROTC program. Richard married his high school sweetheart, Colleen Virginia Hansen, also a student at BYU, in the Idaho Falls Temple on August 27, 1954. He entered the United States Air Force and served as an officer. His duty assignments took him to many locations throughout the United States as well as several assignments in foreign countries. He proudly served his country as a helicopter pilot in the Vietnam War 1967-1968, during which he was decorated numerous times. After twenty years of service he retired from the Air Force. After retiring from the Air Force, he worked for Brigham Young University for 32 years both at the Alumni Association and in Career Placement. Richard was an active member of the LDS Church serving in many capacities: counselor in the bishopric, bishop, and later as a temple worker. He was a devoted student of the scriptures and history and devout in his beliefs. He is preceded in death by his eternal companion, Colleen and is survived by his two children, Randall Dean Cox and Nicole Cox, his daughter-in-law, Rickie Cox, and four grandchildren, Jared Randall Cox, Adam Michael Cox, Nicholas Christian Cox and Madison Anne Cox, and one step-great-granddaughter, Bentlee Petro. Graveside services will be held at 11:00 a.m., Friday, November 14, 2014 at the Provo City Cemetery, 610 South State Street, Provo, Utah. There will be no prior visitation. Condolences may be sent online at www.bergmortuary.com.

The family of Richard Dean Cox created this Life Tributes page to make it easy to share your memories.

Send flowers to the Cox family.