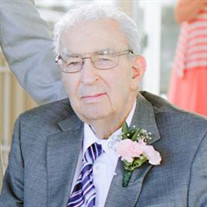 Richard (“Dick”) Harlan Thomas, our sweet, funny, sarcastic husband, father and grandfather, passed away at his home on August 25, 2016 from a long illness. He was born on May 26, 1931 in Provo to Harlan and Fern Thomas, growing up as one of the ‘third south boys’ and working at Thomas Market owned by his family. He attended Maeser and BY Elementary schools, Farrer Jr. High and Provo High School, where he graduated in the class of 1949. He married Maxine Sondrup in Provo in 1950 and later sealed in the Salt Lake Temple. Together, Dick and Maxine had four sons, Hal, Ken, Lou and Max, who grew into men Dick was always proud of, and they loved their dad deeply in return both as a father and a friend. Dick was proud to be a life-long resident of Provo. In his early years, his best friends included the Kuhni boys, and Dick eventually worked for John Kuhni and Sons for over 30 years. He spent his final working years as a Custodial Supervisor at the BYU Marriott Center and football stadium. It was great for Dick and only fueled his love of BYU sports which had begun when he was young, watching BYU basketball play in the old Women’s Gymnasium across from BY High. Dick was a great sports enthusiast, playing basketball for Provo High, in church leagues and sometimes refereeing. He was a BYU basketball season ticket holder from 1951 until he and Maxine could no longer attend the games, and his family still holds football season tickets. He enjoyed hunting with friends and, later, with his sons, and was an avid golfer, going on many golfing trips with his wife, family and friends. Dick enjoyed music, especially Barbershop music, and was a member of the Skyline Chorus for many years, performing with the Provokers quartet with some of his best friends, and serving a period as president of the Chorus. In later years, despite advancing illness, besides frequenting Del Taco, his favorite hobby was enjoying whatever activity or sport his grandkids were involved in at the time, and rarely missed a volleyball game, gymnastic meet, clogging show, high school play, baseball game, swim meet or music recital. His family loved that he could fix, build and repair anything, and especially loved his humor. Dick was clearly the king of the one-liner. He is survived by his wife of 65 years, Maxine, and his four sons, Richard Hal (Lynne, deceased) of Provo, Kenneth Denzel (Kori) of Pleasant Grove, Louis Harlan of Provo, Max Keith (Cathy) of Provo, one sister, Sally (Dale, deceased) Stevens of Monroe, and 12 grandchildren, 6 great grandchildren, and 2 great-great grandchildren. He was preceded in death by his parents, Harlan and Fern, a daughter-in-law, Lynne, and two brothers-in-law, Dale Stevens and Keith Sondrup (Sherma). Funeral services will be held at 11:00 a.m., Wednesday, August 31, 2016 at the Grandview 14th Ward Chapel, 1122 North Grand Ave, Provo, Utah. Friends may call at the Berg Mortuary of Provo, 185 East Center Street, Tuesday, August 30, from 6-8:00 p.m. and at the church Wednesday from 10-10:45 a.m. prior to services. Interment, Provo City Cemetery. Condolences may be sent at www.bergmortuary.com.

The family of Richard "Dick" Harlan Thomas created this Life Tributes page to make it easy to share your memories.