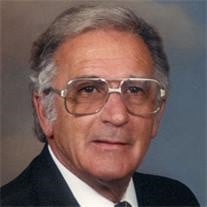 Richard Clifton Dunn passed away peacefully at home in his sleep on March 20, 2013. He was born August 28, 1928 in Delta, Utah to Ralph Clifton and Jean Mitchell Dunn. He married his high school sweetheart, Venice Isom, on September 7, 1949. They were sealed in the Salt Lake Temple in 1962. Dick graduated from Provo High School in 1947 where he was senior class President. He worked at Geneva Steel, Arden Dairy, National Wonder Cleaners, Hostess Bakery and Seethaler Meats. His most loved jobs were for the Provo City Fire Dept., where he worked for 26 years, and 4 years with the Volunteer Fire Dept. where he was the Volunteer Chief for 2 years. During his time at the fire department he was an Engineer, Lieutenant and Captain. He was always giving of his time to the Department. He was in charge of the fireworks for Provo City's July 4th Celebration for twenty-five years and he did the fireworks at different times for Alpine, Orem, the Boy Scouts and the Elks Lodge. He served in many different positions in the LDS Church, with his favorite being teaching the teens in Sunday School. He was the 2nd President of the Utah State Firefighters Union and worked for 18 years for the Firefighters pension board. He enjoyed golfing, hunting, gardening and collecting small cars and fire trucks. He is survived by his wife of 63 years and four children: Randy (Denise) Dunn, St. George, UT, Dennis (Susan) Dunn, Elk Ridge, UT, Vickie (Calvin) Arnold, South Jordan, UT, Tammie (Michael) Healey, Lehi, UT; 18 grandchildren; 25 great-grandchildren; and one brother, Ted Dunn, Draper, UT. He was preceded in death by one grandson, granddaughter and great-grandson. Funeral services will be held at 11:00 a.m., Tuesday, March 26, 2013 at the Grandview 2nd Ward Chapel, 1081 West 1060 North, Provo, Utah. Friends may call at the Berg Mortuary of Provo, 185 East Center Street, Monday evening from 6 until 8 and at the church Tuesday from 9:30-10:45 a.m. prior to services. Interment will be in East Lawn Memorial Hills, 4800 N. East Lawn Dr. (650 E.), Provo, Utah. A special thanks to the 1st Choice Home Health and Hospice Care. In lieu of flowers, please donate to the LDS Missionary Fund. Condolences may be sent through his obituary at www.bergmortuary.com.

Richard Clifton Dunn passed away peacefully at home in his sleep on March 20, 2013. He was born August 28, 1928 in Delta, Utah to Ralph Clifton and Jean Mitchell Dunn. He married his high school sweetheart, Venice Isom, on September 7, 1949.... View Obituary & Service Information

The family of Richard Dunn created this Life Tributes page to make it easy to share your memories.

Richard Clifton Dunn passed away peacefully at home in his sleep...

Send flowers to the Dunn family.