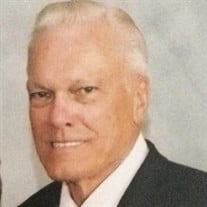 Richard Kay Peterson (Pete), age 83, passed away peacefully on November 30, 2016 in Provo, Utah with his sweetheart by his side. Richard was born on April 9, 1933 at home in Orem, Utah to Peter G. and Louise Larson Peterson, the youngest of eight children. He married his high school sweetheart Marilyn Nuttall for time and all eternity on October 1, 1952 in the Logan Temple. They lived in the Lakeview area of Provo, Utah for the last 60 years. Richard was a loving, devoted father and husband, a community leader, union representative and in his golden years, a beloved school bus driver. He was loved and admired, a friend to all, kind, caring, and never judgmental. He loved sports activities of all kinds and was a very devoted BYU fan and member of the Cougar Club. Golf became a joy once he retired. He devoted an endless amount of time to encouraging, coaching and supporting his children’s sports activities, church sports and driving the bus for sports teams. He was the student body president for the Lincoln High School Class of 1951 in Orem, Utah. In high school he also participated in Rotarian Leadership, Government Training, Boy’s State and ROTC. He played varsity football, basketball and track. His working life extended from Deseret News paperboy to Geneva steelworker, Cloverleaf Dairy milkman and 33 years as a driver/salesman for Wonder Bread/Hostess Baking Company. Upon retirement he became an Alpine School District bus driver and enjoyed transporting students and sports teams to many events over the next 17 years. Devotion to the LDS church was a focus of his life. He was always the first one to the welfare farm, served as a home teacher, YM leader, High Counselor, Bishop’s Counselor, Bishop of Lakeview Ward and temple worker at Provo and Mt. Timpanogos Temples. He provided a great deal of comfort and aid to neighbors and friends which was returned tenfold in his later years. Richard is survived by his wife, Marilyn and five children: Debi Green (Mike), Stephen (Tanya), Sandy Kezerian (Mike), Robert (Nancy) and Michael (Bethany); one brother, Howard (Nellie); 19 grandchildren; 29 great-grandchildren and many nieces and nephews who loved him very much. He was preceded in death by his parents, Peter G. and Louise; brothers, Parlell, J. Reid, Farrell, John and Ralph and sister, Louise. The family gives thanks to all the friends and neighbors who have been so very helpful in his later years. Thanks also to his doctors and nurses at the Huntsman Cancer Center and all of his caregivers as he battled cancer to the end. Funeral services will be held at 11:00 a.m., Wednesday, December 7, 2016 at the Parkway 4th Ward Chapel, 2876 West 1390 North, Provo, Utah. Friends may call at the Berg Mortuary of Provo, 185 East Center Street, Tuesday, December 6 from 6-8:00 p.m. and at the church Wednesday from 9:30-10:45 a.m. prior to services. Interment will be at Provo City Cemetery. Condolences may be sent to the family at www.bergmortuary.com.

Richard Kay Peterson (Pete), age 83, passed away peacefully on November 30, 2016 in Provo, Utah with his sweetheart by his side. Richard was born on April 9, 1933 at home in Orem, Utah to Peter G. and Louise Larson Peterson, the youngest of... View Obituary & Service Information

The family of Richard Kay Peterson (Pete) created this Life Tributes page to make it easy to share your memories.