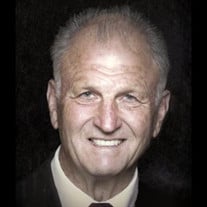 Richard Eugene Wood was born January 28, 1931 in Milfay, Oklahoma. The oldest son of a tenant farmer, born at the crossroads of the Great Depression and the Dust Bowl, Richard’s whole life would be shaped by the difficulties faced in his youth. His parents never owned their own home or property, which, coupled with a lack of education saw to it that they were never fully able to chart their own course through life. Richard’s father used alcohol to escape life’s harsh realities, often with damagingly misplaced anger as the result. Richard’s childhood was all too often punctuated with difficult work and uncertainty. Hard work, ingenuity, determination and persistence were necessities for survival in Richard’s youth, and were traits which he carried with him throughout his life. It was common for Richard to be actively engaged from sunup to sundown. There were few tasks he wasn’t willing to learn how to do, and setbacks always prompted more thought, more learning and a fresh approach until results were achieved. Richard viewed education as the best means of maintaining one’s freedom. He pursued his own education formally, by attending Fresno State College which was interrupted by the draft, followed by Brigham Young University where he completed both a Bachelor’s and Master’s degree, and concluding at the University of Utah where he started to pursue a Doctoral degree. He also pursued learning informally, by searching out books, or knowledgeable people, or through trial and error experience. His commitment to education did not end with his own learning, but extended to a long career in teaching, and a lifelong willingness to help others learn anything he could impart, whenever the opportunity presented itself. Richard was drafted into the Army during the Korean War, but was stationed overseas in Germany. It was while he was in the Army that he noticed a few peculiar servicemen, who stood out because they did not drink or smoke. Since Richard had previously decided to forego drinking and smoking, based on his own lived experiences, he was curious about these men. They turned out to be members of The Church of Jesus Christ of Latter-day Saints. Intrigued by these shared values, Richard investigated and ultimately converted to this faith. His faith in the church remained a vital pillar to the rest of his life. He had countless opportunities to serve his fellow men and his faith community in many different capacities. Perhaps one of the most “fruitful” examples is the years he managed one of the church’s pear orchards. The job required some long days; there were significant challenges to improve yields and cope with disease which required learning and persistence. Working with an all-volunteer labor force, there were frequent opportunities to educate others and share his years of agricultural experience. With his military service completed, and a desire to be immersed in his new found faith community, Richard transferred to Brigham Young University to continue his studies. Richard’s desire for education wasn’t limited to academics, but extended to the arts as well. He particularly loved poetry and opera, and he fondly remembered many opportunities to enjoy the performances of various invited artists while he attended BYU. However, of all the activities during his time at BYU, it was a student ward social hike up nearby Mt. Timpanogos which had the greatest impact on Richard’s life, as it was on this hike that he met Marlene Monson. Before long, the two of them were married in the Salt Lake Temple. Their 62 year adventure on this earth would see them from Utah, to Nevada, to California and back to Utah while they raised two daughters and three sons together. For as long as his mental faculties remained, Richard never stopped thinking about how to provide for himself, his wife and his children. Apart from education, land was probably his greatest obsession. He spent his adult life keeping informed about real estate, going so far as to get his realtors license, start his own real estate office and come mere months from making a full career transition. Though that transition never happened, he nonetheless continued to buy and sell properties throughout his adult life, with an eye toward what the land could provide. Whatever land that he himself lived on, was always cultivated for maximum production. Richard’s friends, neighbors, ward members and any who came to know him in whatever capacity, were sure to reap what he sowed, as there was always more produced than his family could consume or preserve. Richard battled through several different cancers, a sextuple bypass, mini-strokes, car accidents, head, neck and back injuries, snowy Utah winters, his wife’s dementia, and watching five children make mistakes, to pass peacefully from this world in the early minutes of December 25, 2021. He is reunited with his wife Marlene, his brother Bunnie Nathan “Butch” Jr., and his parents Bunnie Nathan Sr. and Vera Mae. His best traits, life lessons and stories hope to be preserved by his daughters, Debbi (Ernie) and Rebecca (Chad), sons David, Paul (Heather) and Kevin (Carol), ten grandchildren and one great grandchild, sisters Florence, Shirley and Jessie Faye, and brother Daryl. Funeral services will be held at 12:30 p.m., Wednesday, January 5, 2022 at the LDS Chapel at 320 North 100 East, American Fork, Utah. Friends may call from 12-12:30 p.m. prior to services. Interment, American Fork City Cemetery. Condolences may be expressed at www.bergmortuary.com.

Richard Eugene Wood was born January 28, 1931 in Milfay, Oklahoma. The oldest son of a tenant farmer, born at the crossroads of the Great Depression and the Dust Bowl, Richard&#8217;s whole life would be shaped by the difficulties faced in his... View Obituary & Service Information

The family of Richard Eugene Wood created this Life Tributes page to make it easy to share your memories.

Send flowers to the Wood family.