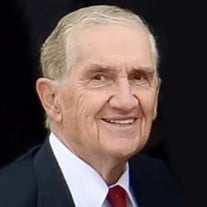 Richard Roland Wootton was born in Washington, D.C. on June 30, 1931 to Roland H. and Ouida Idelia (Pelton) Wootton. He was the youngest of three children, having two sisters, Helen Wootton and Gloria Speikerman. His parents were noble people who emphasized being honest and learned. He married his “Babe” Shirley Ann (Potter) Wootton on May 25, 1956 in the Manti LDS Temple. Together they had seven children: Shari Muncy (Pat); Mark Wootton (Melissa); Wade Wootton (Beverly); Julie Newsome Rasmussen (Shon); Greg Wootton; Jason Wootton (Robyn) and Jennifer Wootton. He also had 26 grandchildren and 14 great grandchildren. Richard attended the public schools in Washington D.C. where he was a member of a championship football team at Central High School. Team members and others became “forever friends” even with the passing of years. He attended University of Maryland for almost two years prior to moving to Provo where he graduated from BYU with B.S. and M.S. degrees before moving to Utah State University with his family of four and obtained a doctoral degree in Counseling Psychology. Richard was employed at Murray High School for five years prior to taking employment at Brigham Young University where he taught in the graduate education program for 32 years. He ultimately retired from his work at BYU and became a Forensic Psychologist; working with many disadvantaged persons throughout Utah until the time of his death. Richard was active in professional and community activities. He was the President of his social unit at BYU (the Tausig’s) and later was elected as the President of the Utah School Counselor Association; the Utah Counseling and Guidance Program; was President-Elect of the American School Counseling Association; served as President of the Utah Mental Health Association; was President of the PTA at the Timpanogas Elementary School; and Chairman of the Utah County Council on Drug Rehabilitation. He also developed the first Utah County Crisis Line and additionally, wrote the grant for “The Gathering Place,” a drug rehabilitation program that was preceded by “The Group”. He most recently has served on the board for Scenic View academy. He rarely spoke of his accomplishments as he preferred to participate in providing assistance to graduate students at BYU and in helping members of the community. He became a forensic psychologist following his career at BYU and engaged in almost 10,000 evaluations for those who had engaged in criminal offenses. Richard loved the gospel and, at one time or another, served in Stake High Councils, was an LDS Bishop in the BYU 23rd Ward, and served as a teacher in almost all activities ranging from primary to adults. He and his wife were loyal home teachers and with his wife’s nudging, sang in the ward choir, an activity he richly enjoyed…Shirley was right again! Richard was a good and loyal husband and father. He was proud of his children and especially glad that he accepted his mother’s admonition to “marry a good Mormon girl.” He never regretted his mother’s advice as finding Shirley was the best earthly discovery that he made. He remained a faithful friend to all. Funeral services will be held at 11:00 a.m., Thursday, December 11, 2014 at the Grandview 17th Ward Chapel, 1122 Grand Avenue, Provo, Utah. Friends may call at the Berg Mortuary of Provo, 185 East Center Street, Wednesday from 6-8:00 p.m. and at the church Thursday from 9:00-10:45 a.m. prior to services. Interment, East Lawn Memorial Hills. Condolences may be sent online at www.bergmortuary.com. He hopes that the funeral service will be a happy one and that we can all meet again in a happy after life. Don’t disappoint him!

Richard Roland Wootton was born in Washington, D.C. on June 30, 1931 to Roland H. and Ouida Idelia (Pelton) Wootton. He was the youngest of three children, having two sisters, Helen Wootton and Gloria Speikerman. His parents were noble people... View Obituary & Service Information

The family of Richard Roland Wootton created this Life Tributes page to make it easy to share your memories.

Richard Roland Wootton was born in Washington, D.C. on June 30,...

Send flowers to the Wootton family.