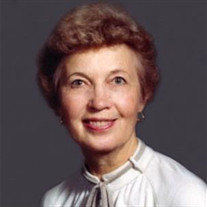 Rilla Jacobson Jackson, 100, passed away Tuesday, Dec. 29, 2015, at Utah Valley Regional Medical Center in Provo. Born Feb. 10, 1915, on a farm in Provo, Utah, Rilla was a twin and the 7th of 10 children welcomed into the home of Ephraim and Ann Marilla Leetham Jacobson. Rilla grew up in Provo, graduated from Provo High School, and attended Brigham Young University, where she also worked in the Extension Division. On June 10, 1936, Rilla married Orrin Henry Jackson in the Manti LDS Temple. They settled into daily living in Provo, raising 4 children, Russell H. (Connie), of Tigard, Oregon; Earl K. (Phylinda), of Provo, Utah; Byron R. (Nancy), of Prescott, Arizona; and Anne (William Slater), of Lake Stevens, Washington; 15 grandchildren, 46 great-grandchildren, and 1 great-great-grandchild. Rilla was preceded in death by her husband, Orrin, in 2001, and by all of her siblings (Glen, Erma, Tess, Lee, Bill, Ken, Reta, Ray, and Evelyn) and all of Orrin’s siblings (Amy, Audrey, Ellen, Louise, Rachel, and Joseph). Rilla celebrated her 100th birthday on Feb. 10, 2015. For the last eight years she enjoyed her lovely apartment at Jamestown Assisted Living, where she appreciated the love and concern of the staff. Rilla was the consummate wife, homemaker, and mother. She enjoyed learning, entertaining, cooking, and volunteering at the Provo LDS Temple and BYU Library. One of Rilla’s hobbies was family history, and so with the progress of the Church into the technology age, she decided (in her 80s) to acquaint herself with the computer. Her strong testimony of the truthfulness of the Gospel of Jesus Christ has been exhibited by her service to others and to her Church. She emanated goodness and purity of thought and action. She had a beautiful inner strength that she carried with grace. Those who knew her used such adjectives as elegant, sweet, strong, kind, loving, and beautiful. She was the epitome of womanhood and is held in the highest esteem by her posterity. Funeral services will be held at 11:00 a.m., Saturday, January 9, 2015 in the Oak Hills 2nd Ward Chapel, 925 E. North Temple Dr., Provo, Utah. Friends may call from 10-10:45 a.m. prior to services. Interment will be in the Provo City Cemetery. Condolences may be extended to the family at www.bergmortuary.com.

Rilla Jacobson Jackson, 100, passed away Tuesday, Dec. 29, 2015, at Utah Valley Regional Medical Center in Provo. Born Feb. 10, 1915, on a farm in Provo, Utah, Rilla was a twin and the 7th of 10 children welcomed into the home of Ephraim and... View Obituary & Service Information

The family of Rilla Jacobson Jackson created this Life Tributes page to make it easy to share your memories.