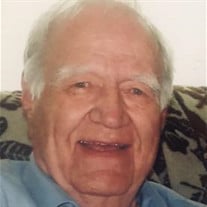 Robert Sevy Clark (May 17, 1924 - July 6, 2019) was born in Panguitch, Utah to Elden Dewey Clark and Pauline Sevy Clark, who were also born and raised in Panguitch. Bob&#8217;s 95 years of life have been focused on family, faith, and devotion... View Obituary & Service Information

The family of Robert Sevy Clark created this Life Tributes page to make it easy to share your memories.