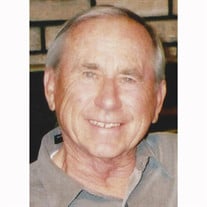 Robert “Bob” Wayne Clements was born August 8, 1931 in Provo, Utah. He passed away Wednesday, October 21, 2020 at the age of 89. He will truly be missed. Bob grew up in Provo, Utah. He served in the US Navy during the Korean War on the USS Hollister. Shortly thereafter he married the love of his life, Janet Gammon. They were the parents of 4 children. Bob, known to his family as Boba, was a wonderful, kind, and loving husband, father, grandfather, brother and friend. He especially loved to spend time with his family. They meant everything to him. He loved being in the outdoors; camping, hunting, fishing, and especially golfing. If you ever needed to find Boba, his turquoise green Jeep Cherokee could always be found at the Provo East Bay Golf Course. He always had a beautiful, immaculate yard. Sunday evenings he could usually be found in the front yard playing ball with the grandkids and great grandkids. He loved music and was known for whooping, hollering and often dancing to his favorite tunes; putting smiles on the faces of his family and loved ones. The grandkids fondly remember him shaking the house as he blasted the William Tell Overture on his stereo. Bob worked for Highland Dairy, UPS, and Utah Valley Community College. He was a man of faith and was proud of being a member of The Church of Jesus Christ of Latter-day Saints. He is survived by his siblings: Richard “Dick” (Janet Carter) Clements, Sally (Larry) Sheriff, and Dianne Thompson; children: Julie (Fred) Michel, Kevin (Dana) Clements, Kari (Wayne) Buhler, and Joe (Julie) Clements; and many grandchildren and great grandchildren. He is preceded in death by his parents, John Henry and Olga Clements; his wife, Janet; and siblings, Hank Clements and Shirley Lassen. Funeral Services will be held on Saturday, October 31, 2020 at 11:00 am in the Lakeside 8th Ward Chapel located at 131 S. 1600 W., Provo, Utah. There will be a viewing prior to the funeral from 9:30-10:30 am. Masks are required. Interment will be at the Provo City Cemetery following the service. Condolences may be expressed to the family at www.bergmortuary.com.

The family of Robert Wayne Clements created this Life Tributes page to make it easy to share your memories.

Send flowers to the Clements family.