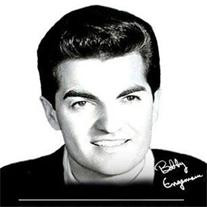 Robert Philip Engemann returned to our Heavenly Father on January 20, 2013, surrounded by family and close friends. A joyous day, being reunited with his eternal companion Betty, and returning home with honor. Bobby was born in Highland Park, Michigan on February 19, 1935 to Paul Robert and Lillias Susan Nicholas Engemann. He married the love of his life, Betty Irene Crail, for time and all eternity on August 18, 1961 in the Los Angeles LDS Temple. After attending Brigham Young University, a stint in the U.S. Air Force, and serving a two-year LDS mission in Minnesota, in 1959 Bobby became a founding member of The Lettermen, the #1 "adult contemporary and romantic group of all time", according to Billboard Magazine. This phenomenal group enjoyed 20 hit singles, 46 consecutive hit albums, 9 gold albums, five Grammy nominations, sold well over $100 million worth of records and with top hits such as "The Way You Look Tonight", "When I Fall In Love", "Theme From a Summer Place", and "Goin' Out Of My Head/Can't Take My Eyes Off of You", The Lettermen captured the hearts of young lovers throughout the world. In 2001, The Lettermen were inducted into the Vocal Group Hall of Fame, along with The Four Freshmen, The Bee Gees, and others. Bobby and Betty enjoyed years of traveling the world with The Lettermen for concert tours, forging lifetime friendships and creating lasting memories. Bobby's family was his first priority. He loved spending quality time with his children, with countless hours coaching youth sports, attending practices and games to cheer on his family; he was an avid athlete himself leaving baseball behind to follow his singing career. However, he was a family man and wanted to spend more time at home with his wife and their four children, thus, he ended his touring years and started his next life chapter. At that time, he began producing records and music for Capitol Records, United Artists Records and Hanna-Barbera television productions, producing stars such as Cheryl Ladd, Kurt Russell, Josie and the Pussycats and Scooby Doo. He also founded and was President of Independent Recorders, Inc. in Los Angeles where hit records were recorded by such artists as The Beach Boys, Paul Anka, Mac Davis, Bobby Gentry, and Olivia Newton John, among others. Bobby fondly remembered those days as creative and exciting times. In 1977, Bobby and Betty moved from Studio City, California, to Provo, Utah to join his Alma Mater, BYU, as a Development Officer, raising hundreds of thousands of dollars in funds for the University's major building projects, including what would become Lavell Edwards Stadium, and academic programs. Over the years, he kept his vocal talents sharp by singing with several performing groups, including Reunion, with former Lettermen Jimmy Pike and Ric De Azevedo of the famous King family, as well as Star and Galaxy. Over the years and even recently despite his health, Bobby managed, promoted, and coached numerous local talents, having a dramatic influence on local performers with his uncanny ability to bring out the best in anyone. Bobby was a magnificent man, not only in word but in deed; his fame never influenced his priorities. "He lived the life the Savior wanted him to live", remarked his brother, Karl Engemann. Bobby's life was rooted in the Church of Jesus Christ of Latter-day Saints and was dedicated to missionary work and diligent in his callings, including BYU High Counsel. He changed the lives of many through his testimony of the gospel of Jesus Christ, and was the ultimate example of Christ-like charity, love, and enduring to the end. He truly fought the good fight – he was our superhero. "Able to sing whole notes with a single breath – LETTERMAN". Bobby was preceded in death by his beloved wife, Betty; he is survived by his brothers, Karl (Geri) and Bill (Kathryn); sister, Jean (Ed) King; children, Andrew (Dana), Lizanne, Melissa, and Danny (Jenny); foster daughter, Betty (Raymond) Begay; 19 grandchildren, 20 great-grandchildren, and countless extended family and friends who he loved with an eternal love that's forever and ever! Funeral services will be held at 11:00 am, Saturday, January 26, 2013 at the Edgemont South Stake Center, 350 E 2950 N, Provo. Family and friends may call on Friday evening from 7:00 to 9:00 pm at Berg Mortuary of Provo, 185 East Center Street, or on Saturday morning at the Ward Chapel from 9:30 to 10:45 am. Interment will be at East Lawn Memorial Hills. Condolences may be sent through his obituary at www.bergmortuary.com.

Robert Philip Engemann returned to our Heavenly Father on January 20, 2013, surrounded by family and close friends. A joyous day, being reunited with his eternal companion Betty, and returning home with honor. Bobby was born in Highland Park,... View Obituary & Service Information

The family of Robert Engemann created this Life Tributes page to make it easy to share your memories.

Robert Philip Engemann returned to our Heavenly Father on January...

Send flowers to the Engemann family.